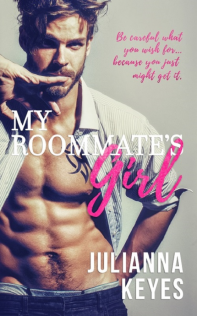 I have been a fan of Julianna Keyes ever since I discovered her from one of those chance reads I took on Netgalley. Julianna has a way of writing that delivers stories that maintain a realistic edge, and at the same fulfill the yearnings of the romance reader for the angst-ridden and sexy reads that make our day. Plus, Julianna always has a unique tangent to her writing, with twists to existing tropes that makes her books so worth your while.

My Roommate’s Girl toting a gorgeous cover, is written in the first person, told from both Aidan Shannon Shaw, the hero’s, and Aster, the heroine’s point of views. Aidan meets Aster through Jerry, his roommate, whose girlfriend turns out to be none other than Aster. From the moment Aidan lays eyes on Aster, he wants to have her for himself, he needs to have her. But there is of course that little pesky problem of the boyfriend who stands in his way. So sets Aidan on the course that would deliver Aster into his arms, as conniving and manipulative as it sounds.

What unfolds next was not by any means predictable. One would think it would be, given where the story was headed, but the way Julianna peeled back the layers to both Aidan and Aster was truly masterful.

Aidan’s character is easier to figure out in a way; the troublesome background, the way it had been easier for him to fall in with a bad crowd and lose his way. Until a judge had seen through his belligerence and decided to give him the chance to clean up, or else. But like a tweet I came across just today, “the devil works hard but peer pressure works harder”, and that is exactly the case with Aidan as well.

Now Aster, she is the true gem of the story. Her character managed to surprise me at every single turn, and that is no mean feat for someone who reads through so many romance novels and can often predict character behavior from a mile away. But damn, Aster certainly managed to shake my preconceived notions and then some. I felt proud of her for identifying with what had happened, and even fighting back just as dirty to get even. But then again, Aster did not take into account how seductive it is to be stripped bare of all the fronts she has put up, and to be seen exactly for who she is; not the image of perfection that she presents to the rest of the world, but a woman with faults and flaws of her own, someone who learnt from her past and aims to never go down that path again.

Like every single hero I have read from Julianna, Aidan is sexy personified. From his dirty blond hair and that raw physique of his, to the way he wants Aster with every fiber of his being; all that and more made him pretty alluring. Even though the only way Aidan knows to get what he wants is to fight dirty, with Aster, he finds that his conscience doesn’t allow him to be half the douche bag he could really be. For him, Aster is the woman that makes it all matter; she makes him want to stand steadfast on the path of the straight and narrow.

I loved Aster just as much. The fact that she had been able to leave a difficult past behind and clean up her act, that spoke volumes when it comes to the strength of her character and the kind of person she is. And she proves to be just that, honest and kind where it matters. I loved the ending, the way it all came together and how everything worked out. There is nothing better than a happily ever after for a couple you root for from the very beginning, even when that beginning might be the furthest thing from perfect.

Recommended for fans of romances that deliver unusual twists and turns that makes the book that much more worth it.

Final Verdict: My Roommate’s Girl delivers a succulent tale that is trademark Julianna Keyes, with characters that are relatable, and a happily ever after that I rooted for from the very beginning!

I kiss her.
I don’t even think about it, I’m just acting on instinct. The hand on her hip slips around to the outside of her arm, up to her shoulder, her neck, fingers curling into her nape. She doesn’t move, doesn’t look away from my mouth, and the soft flutter of her lashes is the last thing I see before my lips touch hers.
She makes a tiny sound when our mouths meet, and I feel a tremor roll through her, like a frisson of energy arcing from her body into mine. I fumble behind me to stick the spoonful of melting ice cream back into the carton, only fifty percent sure I manage the task, a hundred percent sure I don’t care.
I cup her face with both hands, feel her silky hair teasing my fingers, the softness of her mouth, her breasts pressed against my chest. The tip of her tongue touches my bottom lip at the same moment her hand comes up to stroke my cheek, and I leap away like I’ve been electrocuted.

“Aidan,” she moans again.
“What…do…you…need?” I grunt out. Sensation is rocketing up and down my body, from the top of my head to the tips of my toes, things I’ve never felt before and don’t know what to do with.
When I first saw Aster, first thought of fucking her, I didn’t think it would be like this. I thought she’d be prim and proper, maybe ride me like a dainty cowgirl. I thought I’d dirty her up, scandalize her a bit.
Now I don’t think I could scandalize Aster if I tried. She fucks like it’s the most natural thing in the world, like my hands pulling her hair is the thing she likes most. Like my mouth on her nipples and my cock plowing into her is something she lives for. I want to earn those responses. I want to hear them. I want to taste them.

When I first arrived at Holsom, I was terrified. It was new and strange and even among thousands of students, I felt hopelessly alone. Meeting Jerry helped, but I never truly relaxed. Never felt like I belonged. I thought I might, one day, but even after a year of dating I knew that deep down, he never really knew me because I never really let him.
Aidan knows me. I only let him know me because I thought I’d never see him again, but here we are, out in the middle of nowhere, and I don’t feel alone at all. I feel like he sees me and he’s totally okay with what he sees. Scars and all.

At long last I’m seated, his cock buried inside, taking a moment to adjust to the aching fullness. I grind my forehead into his shoulder, feeling him, feeling everything, and he lets me take my time, no pressure, no hurry.
I shift so my lips find his neck, his racing pulse betraying his laidback demeanor. I flex my thighs and lift up slightly, then slide back down, finding an easy, unhurried rhythm that makes everything inside me go soft and molten.

Aidan drops his hands from my hair and I see him digging his fingers into the sand at his sides, trying to hold on. Trying to wait for me.
That’s what sends me over. The sight of this man, weak but still so strong. Hard, solid, tough, sweet. A study in contradictions.
I come with a soft cry, stifling the sound in the curve of his neck, tasting his sweat on my tongue. My body spasms in long, slow waves for what feels like an eternity, and when the orgasm ebbs away Aidan jerks beneath me, hips pushing into mine as he anchors me with his hands on my waist, holding me in place while he takes what he needs.
My limbs feel like jelly, like there’s no earthly way I can stand, no possible way I’ll be able to hike back. I lift my head and absorb the quiet forest, the pristine lake, the boundless sky. This is the farthest from civilization I’ve ever been, but out here, with just me and Aidan, I’ve never felt closer to home.