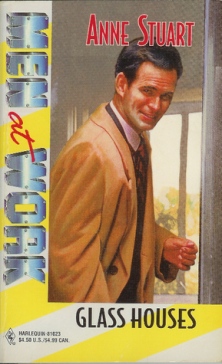 Glass Houses by Anne Stuart was picked as my next read to chase away the dissatisfaction that had been left behind by the last novel that I had read. Anne Stuart is an author who continuously delivers. After all, there is a reason why she is a queen of the genre itself, no matter in which sub-genre she chooses to write.

Glass House is referred to as a famous New York landmark built by the grandfather of the heroine, Laura de Kelsey Winston. Owner of Glass Faces, a small and exclusive up and coming modeling agency owned by Laura herself, she is determined that she would protect the building and preserve its authenticity at any cost, no matter how many vultures might circle her in their attempts to buy the land plot upon which Glass House stands.

However, in Michael Dubrovnik, known as Whirlwind to his competitors, Laura finds the most formidable buyer that yet, willing to fight dirty to get what he wants, with him explicitly stating so. Underneath all the back and forth that happens between Laura and Michael, starts an awakening of the senses, especially for Laura, whose young heart had been bruised by the fact that she was considered the “ugly swan” among the rest of the beauties in her family. Plus, the actions of her mother had left its mark on Laura, something which makes her believe that sex would never be enjoyable for someone like her, and she has so far succeeded in her attempts to steer clear from any amorous intentions of the opposite sex she comes across.

Michael manages to get under her skin in a way that leaves Laura vulnerable. It is not easy for someone who projects a cool front otherwise, to lose her temper and other senses so spectacularly around a man as experienced in his ways as is Michael. But Laura is not alone in feeling that sizzle of longing and awareness. Michael too is caught in its tendrils and before they know it, both Laura and Michael are tumbling into a world where only the headiness of sensual pleasure rules. But when tragedy comes calling, Laura must decide what it is that she would do; wave the white flag of surrender or carry on business as usual, if she wants to have it all.

I loved Glass Houses and the feels that this novel brought out in me in spades. I believe that the effect was magnified by a hundredfold because of the lackluster story I had read earlier as well. But then again, it IS Anne Stuart we are talking about here, the author who can do no wrong, 99 per cent of the time.

I loved Michael. He is arrogant in a way that comes from climbing his way to the top with sheer hard work and making a name for himself where many had failed. His arrogance itself served as a turn on at appropriate moments. That is the sheer brilliance behind a character well written.

But the most fascinating aspect to Michael was how well he saw into Laura, how insightful he was when it comes to the woman she is behind the facade she presents to the rest of the world. Of course, that is not surprising given he is ruthless in his business ventures, and for that, he needs to be able to read people. But for once, Michael is unable to exert his usual ruthlessness to full effect, because unknowingly, Laura also loosens something dangerous and possessive inside of him.

Laura was one of those spunky heroines that Anne Stuart is famous for. She is feisty, goes out of her way to thwart all and every attempt of Michael to win her over, goes as far as to thrust another woman towards him as she pursues her interests elsewhere; all the while kidding to herself on the extent to which she was already compromised. The period of separation between Michael and Laura was one that brought on the angst factor, which I of course loved. I believe that Laura needed that period of healing in order to start over from a clean slate where she and Michael were concerned.

Definitely adored the ending. It was just fitting!

The secondary romance tucked in between the high octane tale unfolding between Michael and Laura was equally enticing. Loved how Susan finally got what she deserved, in the arms of none other than the man she had been in love with, ever since she had come to know him.

Recommended for fans of sizzling hot romances featuring a tad of a ruthless hero and a heroine who will fight till the very end before giving in.

Final Verdict: What a good novel does for you is priceless, and that is what Anne Stuart undoubtedly delivers, every single time.

She didn’t even have time to get self-conscious. “You have the most beautiful body,” he whispered, his mouth traveling down, brushing the tops of her full breasts as his fingers slid the narrow straps down over her arms, pushing the silk away from her body to land on the floor. She was standing naked in his arms, and shyness washed over her body in a dull pink haze. She tried to turn from him, but he wouldn’t let her, and the hands that ran up the length of her were gentle, almost worshipping. “I love your breasts,” he whispered, his hands brushing their softness, so that she wanted to cry with longing. “I love your hips brushing against me, I love your arms around me, I love your mouth under mine, I love your legs, I love…”

“If you think you’re all done for the night, babe,” he whispered, “you’re wrong.” And putting his hand between their bodies he touched her, deftly, deliberately, as he surged forward once, twice, three times.
She heard the muffled cry from a distance and knew it was her own. His mouth covered hers, drinking in her cry, as his body pushed her over the edge into places she’d never even dreamed existed. There was only rippling darkness, his body pulsing within hers, as every muscle, every cell in her body convulsed. It went on forever, a timeless, impossible eternity, and when she finally returned to the mattress beneath her and the man above her, the room and the noise and the New York City night, her face was wet with tears.

He was too fast for her. Before she had the faintest idea what he was going to do, he’d pulled her into his arms. Her laughter faded into silence as his mouth covered hers, wet from the rain, tasting faintly of whiskey.
She was too startled, too breathless, to react as she should have. Instinctively she put her arms around him, and suddenly he lifted her, swinging her around, away from the shelter of the building and out into the pouring rain again. She clung to him, half out of dizziness, half out of a sneaking, self-destructive streak she couldn’t fight anymore. Damn it, she wanted to kiss him. And kiss him she did, opening her mouth to his as the rain poured down around them.

Before she realized what he intended, he pulled her into his arms, tightly against his body. He was far more aroused than Carnaby had ever been, and the tension and strength vibrating through him effectively wiped out any other considerations. When his mouth met hers she was absurdly ready, hungry for him despite all her better judgment.
She moaned when his tongue touched hers, pushing him away with her freed hands as her mouth answered his. Ignoring her lands, he cupped her face, holding her still for the scorching power of his kiss, and her fists grew feebler, batting at him weakly.

He released her breast, and her skin felt damp and cool compared to the feverish flush that covered the rest of her body. “This is a game for two players, Laura,” he said, his voice rasping in the darkness. “Touch me.”
She released his arm, reaching up to tentatively caress his shoulder. He was covered with a fine sheen of sweat, and she could fee! the tension pulsing through him. “No,” he said, his voice hard. “Touch me.”

She couldn’t pretend not to know what he meant. And suddenly she wanted what he wanted. She wanted to feel that heavy male power in her hands, wanted to know what would soon be a part of her. Running one hand down his chest, she let it slide across his taut stomach, down the crisp curl of hair. And then she touched him, the silken length of him, the satiny-smooth flesh, the heat and desire and dampness and sheer size of him.

For a moment she panicked, trying to push him away from her, tightening up against an invasion she wasn’t sure she wanted. “Don’t fight me,” he murmured, but she couldn’t hear him, lost in her own unexpected alarm.
The sharp pain on her shoulder startled her into a shriek of dismay. Michael took advantage of his deliberate distraction, pushing in deep, filling her with his strength and masculine power. She shuddered, accepting him, and when she looked up, her eyes were glazed with tears.
“You bit me,” she whispered.
“Needs must when the devil drives,” he murmured, running his tongue over the teeth marks on her soft white shoulder. And he began to move.

“Don’t leave me,” she whispered.
She didn’t need his small smile to know that he’d won. It no longer mattered. He returned to her, thrusting deep and hard, and his voice in her ear was just a reminder of her weakness. “I told you you’d beg me not to leave you.”
Deep in her body he was holding still, and she had no choice but to respond. “You’re a manipulative bastard, Mischa.”
“Yes.” He reached down, took her legs and wrapped them around his waist. “But I’m honest about what I want. And I want you.”

Her fingernails raked across his back, but he ignored them, his hands bruised her wrists, but she ignored them, clinging to him with her arms, her legs, her body, holding tight and reaching… reaching…
“Look at me,” he said, his voice hoarse, his muscles standing out with exertion. “Open your eyes and look at me, Laura. I want to watch you when you come.”
She opened her eyes. “I’m not going to,” she said faintly. “I’m not…”
“Yes,” he said. “You are.”
And suddenly she did, convulsing around him, shock and surprise spinning into blind sensation as she was swept away, caught in a whirlwind of dark desire that was twisting and turning her, tossing her into a night where nothing existed but sheer sensation.

Her entire body began to quiver. She was covered with a fine film of sweat, her breathing was rapid and shallow, and the pleasure he was giving her was so exquisite, she thought she might die from it. “Stop,” she whispered hoarsely, unable to bear any more. “I can’t…”
“Yes, you can.” His voice was nothing more than a breath of sound on the still night air. And suddenly she did, biting her lower lip as her body convulsed in a reaction that was still too new. He held her tight, prolonging it, prolonging it so that she thought she might explode as tears poured down her face.