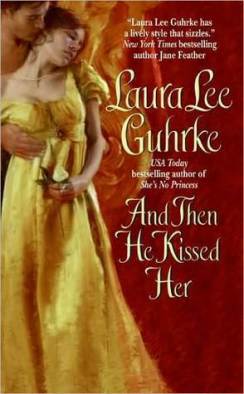 Laura Lee Gurhke is a name that you come across many times over if you read historical romances. In my bid to read a good historical romance (because there are times when you just want more of the magic that comes from only the said genre), I decided to take the plunge and read the first book in the Girl Bachelors series entitled And Then He Kissed Her by the author.

The heroine Emmaline Dove (Emma), who turns thirty years old, has been working for Harrison Robert Marlowe (Viscount Marlowe) for five years when the story begins. Harry is a publisher, and Emma is determined to get her book on the correct conduct for girl-bachelors like herself published through her employer. If only he would give her book the time of day and consider it worthy of publication.

When Harry turns her down for the umpteenth time, and Emma discovers that Harry has never in fact read one of her manuscripts on the many occasions that he had turned them down, it is the last straw. She quits, believing that if she wanted to make things happen, it is she who should get to it. So she goes forth in the world to become a success in her own right, proving to Harry many times over that determination would get one to places.

There is nothing more tedious to Harry than sifting through a book on correct decorum and behavior. So Harry finds himself without Emma’s quiet efficiency to run pretty much everything in his life. Harry finds himself in a bit of a pickle when he realizes that for some reason, Emma’s writings are making waves in society as he never thought possible. After many a hurdle, forges a new relationship between the two, where Emma and Harry meets as equals, where he considers her opinions and thoughts, where she gets to be heard. Through it all, Harry discovers to his utter fascination that he wants Emma unlike he has wanted any woman in a long time.

Harry, who has sworn of marriage after the disaster of his first, is all sorts of improper for a woman like Emma, whose entire childhood and adult life has always been about doing what is proper. Her rigid upbringing plays its role, and Emma is afraid to look beyond and make reality of the woman she actually wants herself to be. Passionate, daring, and adventurous. In Marlowe, she finds that she can be all that and more with him, but years of indoctrination is hard to shake off. But shake it off she does, in the most spectacular fashion, leaving both Emma and Marlowe breathless with every encounter between them.

The best part of this story was the slow awakening of Emma, to realize who she truly is, and accept the parts of herself that contradicts all the proper behavior and decorum that had been drummed into her since childhood. Harry was a tad insensitive at times, but once you get the frustration on his part to get through to Emma, it becomes understandable as well. Harry is the catalyst that pushes Emma to see beyond who she believes she should be. He teaches her the pleasures of life, and Emma blossoms so beautifully beneath his tender ministrations, in bed and out of it.

While Harry took his own sweet time in coming to certain realizations, he did step up and do the “proper” thing by Emma when all was said and done. I loved Emma, because she is the sort of character whom you cannot resist. There is just something about heroines called Emma. They make for rather proper and at times the most fun heroines when everything unravels. Brings to mind Sandra Marton’s The Bedroom Business. Such a wickedly fun book such as this one.

Recommended for those that love a good historical romance. There is romance, there is angst – the best of both in my opinion.

Before she could descend on her own, he put his hands on her waist, thinking to be chivalrous and lift her down. But the moment he touched her, he forget that intent and his thoughts became much less noble. His forearms brushed the sides of her hips, and another wave of desire shimmered through his body. He’d been right. She was wearing a petticoat or two, maybe, and a corset, definitely, but no padding. He slid his hands down an inch or two, grasping her hips, and his thumbs brushed the base of her spine. There might not be much to Miss Dove, but what she had was genuine.
His hands tightened, and he leaned closer, breathing deeply of talcum powder and fresh cotton, pristine, maidenly scents he’d never dreamt could be erotic until now. If he moved one inch closer, he’d be kissing—
“My lord?”
Good God, what was he doing?

Before she could guess his intent and stop him with some ridiculous rule of etiquette, he grasped her wrist, lifted her hand, and opened his mouth. His lips closed around her fingers and the remaining half of the truffle.
She gasped, but though she tried to pull her hand away, he wouldn’t let her. She glanced at the door, then back at him as he slowly pulled the candy from her fingers with his mouth.
He saw her lips quiver and heard her breathing quicken. He perceived the change in her body, a purely feminine reaction of passion tempered by modesty. By innocence. Harry’s body began to burn.

He slid his hand to her cheek, and she gave a gasp of shock. “What are you doing?” she whispered.
He bent his head and paused with his lips an inch from hers. “Committing a serious breach of etiquette,” he murmured.
And then he kissed her.
The moment his mouth touched her own, Emma forgot where they were, forgot what was proper, forgot everything she had ever been taught about right and wrong. There, in the half-light and shadows of a dusty bookshop, she forgot that kissing was only for married people and that she was a spinster of thirty. With this man’s warm palm cupping her face and his lips pressed to hers, joy unfurled inside her, beautiful, painful joy. It was like nothing she had ever felt before. It was like nothing she could ever have imagined.
It was like springtime.

She brought her hands between them to touch his chest. His silk waistcoat felt smooth against her palms. Beneath it, his muscles were hard and warm. Emma slid her palms across his chest beneath his jacket to his shoulders, savoring the strength of a man’s body for the very first time, knowing somehow that for this moment, all that strength was hers to command. She wrapped her arms around his neck and pressed closer, wanting that strength to enfold her.
Her move seemed to ignite something inside him. He made a rough sound against her mouth, and his free arm wrapped around her waist. He lifted her onto her toes, pulled her fully against him. His free hand curled around the back of her neck. He deepened the kiss, and his tongue entered her mouth. Emma made a wordless sound of shock, but then she touched her tongue to his, and waves of pleasure shimmered through her. For the first time, she understood what carnality truly was.

He lifted his head and captured her mouth with his, smothering the echo of his name against her lips. His hand tightened at her breast, he groaned into her mouth, and he deepened the kiss. He touched her nipple again, sliding his fingers back and forth across it within the tight confines of her underclothes, and her body shuddered in response. She felt as if she had no ability to govern her own body, for his touch was causing her to move in the strangest way, arching into his hands in little twitches that she could not stop. She could hear herself making soft, queer noises against his mouth, smothered, primitive sounds, and she felt as if she were drowning in a sensuous haze. What he was doing was like nothing she’d ever felt before, and she wanted it to go on and on and on forever.

“Stop talking about my undergarments,” she whispered, the rosy blush in her face spreading down over her face and neck. “It isn’t…” She wet her lips. “It isn’t decorous.”
“Decorous?” He laughed softly. “Emma, when he’s taking off a woman’s clothes, a man doesn’t feel decorous. Neither does she if he’s doing it right. Besides, we’re just talking, making conversation.” He nuzzled her ear. “Having social intercourse, you might say.”
She made a choked sound.

She fingered the sash. “Don’t I get to undress you, too?” she whispered.
Do you want to?”
She nodded, staring at his chest. “Yes. Yes, I do.”
He spread his arms wide. “Go on, then. Tonight’s all about what you want.” He grinned. “I’ll teach you all the things I want some other time.”
Emma untied the sash, then grasped the facings of his dressing gown. She slid the heavy silk back from his shoulders and it fell behind him to the floor. She stepped back a little and stared at his chest, but after a few moments he couldn’t stand it. “Touch me, Emma,” he said hoarsely. “Touch me.”

Harry inhaled a sharp breath and tilted his head back as she began to explore him. She ran her hands over his chest and across his shoulders, down his arms and back up again, over his ribs and down his abdomen. Her fingertips caressed his ribs and she leaned in, pressing a kiss to his collarbone. She laughed softly, blowing warm breath against his skin. “You’re beautiful.”
Something hot and tight twisted in his chest, something that had nothing to do with the lust in his body. Something in the naive wonder of her voice that hit him deep down and lifted him way up and made him feel as if he were king of the earth.

“Emma, Emma, let it happen,” he coaxed, his lips brushing her curls. “Just feel it and let it happen.”
He kissed her and licked her, and after a moment or two, she gave a little sigh as something in her seemed to relax. She began to move her hips, and he took his cue from her, pleasuring her at the pace her body demanded, faster and faster, until she was trembling all over and arching into him, until she was moving with frantic little jerks and soft, primitive cries were coming from her throat. Until she made that sweet, long wail of feminine ecstasy and her body collapsed.