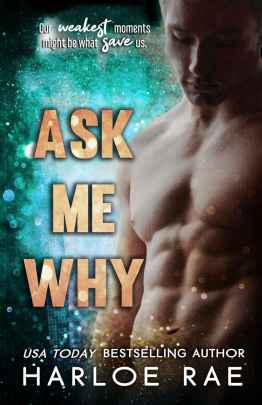 Ask Me Why by Harloe Rae is a story that caught my ever roving eye because I am a sucker for an anti-hero or a hero whose most redeeming qualities aren’t visible from the get go. I mean, I can take heroes who are sappy, good to the very core of their existence etc. to a certain level, but I need my fix of anti-heroes, who are in short supply, considering the need for authors to conform to what the current reader-base wants, and how romance as a genre has evolved over the years.

The heroine Braelyn Miller is three years in her road to recovery from the deepest loss that has marked her life; the loss of her significant other Devon, to a senseless accident. Suffering from post-traumatic disorder, panic, and anxiety since, Braelyn gives all of herself to her shop which stocks all sorts of knickknacks for those looking for something out of the norm. It is the abundant candy section at her store that draws Oliver Stone (Ollie), a young boy whose enthusiasm and joy brings undiluted happiness to Braelyn for the first time in a long while.

However, all of that is overshadowed by Ollie’s father, a successful divorce lawyer Brance Stone, who carries his cynicism close to his heart like body armour. With a mother whose actions had left its bitter mark on him, to Ollie’s mother who had removed any ounce of compassion left in his heart, Brance’s only saving grace comes from Ollie, for whom he would brave the store of Braelyn’s, even if it means his entire being prickles and goes on high alert mode in a way that does not sit well with him.

Brance views all women with suspicion, especially given that he knows the effect he has on women at large. However, that suspicion is laced with contempt when he believes that Braelyn is using Ollie to get close to him. Clash is what Brance and Braelyn do at first, their verbal warring such fun at certain points, laced with heavy moments as well. But ultimately the fight goes out of both of them and succumb they do to the thick and heavy desire between them which is almost palpable at times.

I enjoyed Ask Me Why in a large way because I needed the kind of hero that Brance was in the story. I have missed heroes like him to the point I could cry! Ollie contributed in a huge way towards making the story adorable. That is no mean feat I tell you. Especially given the fact that my previous read featured a child who was so tiresome, that I felt like throwing my Kindle at the wall most of the times. Then came Ollie, and all of that discontentment went poof and I was all smiles and love and wanting to cuddle the little guy for all the optimism and inquisitiveness he brought to the story.

I also adored Braelyn. She was hands down, one of the best aspects of the story. Her unwavering strength in the face of such a tragedy was something I could identify with, be it in a little way. It is not easy to pick up the pieces of your life when you suffer such a terrible tragedy, and there is an embedded message of hope in Braelyn’s phases of recovery. One does not get cured overnight, it takes effort and the love of well meaning friends/family around you to keep you grounded and able to take those difficult first steps, one at a time. Her inherent goodness shines through in every single aspect of the story and I couldn’t have asked for a better heroine in any way.

Let me not forget to mention just how much of an effect Brance had on me. He was obnoxious at points where I wanted to throw something at him, but that does not detract from the fact that he is sexy in a way that makes you melt on the spot. Once he turns on his charm, and when he is not even trying, there is a certain way with which he carries himself that does a number on you. The term sex-in-a-suit was invented for men like Brance, and alongside with that confidence of his, I was a mess every time he started talking dirty!

With all that I loved about the book, there were a couple of things that disturbed me as well. I understood why Brance was the way he was; cynical and damaged from the past that had done its number on him. But I found his attitude towards Ollie’s mother to be double standards; he himself sort of agrees to that. He is all for women’s rights and each woman having the independence to decide whether they want to carry a pregnancy to term or not.

But when it comes to Ollie’s mother, Brance was practically the one that “forced” her to do have him. Don’t get me wrong, I can’t even imagine the story without Ollie. I also agree that the way Ollie’s mother treated Brance from that point forward was abominable, but what do you expect when you force someone to do something that they do not want to wholeheartedly? Resentment flares and some people are obviously worse than others. I am not excusing her behavior for one second, but I just found it all to be very hypocritical.

That brings me to the point where things head south in Brance and Braelyn’s fragile beginnings of a relationship. When Braelyn suffers a panic attack (with good reason if you ask me), and Brance did not even try to understand where she was coming from, at that moment I actually hated Brance. For someone who suffers from the same, I understood the panicky, end-of-the-world scenarios that had been running through Braelyn’s mind at that point in time. Once your brain starts running in that direction, it is extremely difficult to rein it in and keep it in check. Because lets face it, our minds tend to have a life of its own; that is one reason why it is so fascinating as well. I would have liked it better, had Brance tried to understand, even a little.

However, I bow down to Harloe Rae’s amazing ability to spin a tale that sucked me in right from the beginning. I enjoyed Brance and Braelyn’s extremely bumpy journey to their happily ever after.

Recommended for those who love a hefty dose of their alpha-holes. Brance is definitely that and more! My first Harloe Rae certainly did not disappoint!

Final Verdict: Ask Me Why is breathtaking on many levels, combining terrible tragedy and heartache with the surprising curve balls that brings immense joy and happiness in life; I loved Harloe Rae’s voice that resonated deep within.

I find a sliver of space to move closer. “Wanna hear a secret?”
“Always,” Braelyn purrs.
“You’re a damn distraction.”
She snaps her fingers. “Guess it sucks to be you.”
Her tactics don’t deter me. “All I can think about is wiping that sad look off your face.”
“I’m fine, other than these inconvenient visits from you.” Her guarded eyes skitter away from mine.
“Don’t lie. You want me. Just once would do. I’d turn that frown so far upside down, you’d never stop smiling.”
“Cocky asshole.” She dips her chin, but I catch the blush staining her cheeks.
I close the distance between us by another foot. “I’ll lick your clit until you scream my name. Then it’ll be my cock’s turn to pleasure you. Over and over until you beg me to stop.”

I shiver when Brance’s hand begins to wander. His fingers drift along the bare skin of my inner thigh. The loose fit of my shorts grants him easy enough access. I sag against the shelf when he reaches my center. Brance shoves my panties to the side with masterful precision. He glides through my slick heat, turning me into a quivering mess. He doesn’t waste time teasing with me, zeroing in on my clit with sure strokes.
Brance rips his mouth away with a snarl. “You’re wicked. This shouldn’t be happening.”
“But it is,” I whisper.

The talking abruptly cuts off when he crashes our mouths together. I moan into the kiss, arching against him. His lips drift up my cheek and temple. The move is almost tender.
“You’re such a pain in my ass,” he growls close to my ear.
I shift against him, rubbing along the hard ridge prodding at me. The empty space inside of me weeps. I curl my fingers on the shelf, but metal doesn’t satisfy me. A chunk of finely toned Brance would do nicely. I want to grip his sculpted ass and soothe any pain he might be feeling.

I crawl backward until my head bumps against a pillow. He reaches behind him and strips off his shirt with one smooth move. I’m antsy, rubbing my thighs together before spreading them apart. Brance undoes his jeans and shoves them down. He stands before me in a black pair of briefs, tenting in the front with his desire.
For me.
I prop myself up and lick my lips. With a curl to my fingers, I beckon him to me.
Brance strokes himself through his shorts. Such a damn tease. “Take off anything you don’t want ripped into shreds.”

Make me feel good.”
“Don’t I always?”
I open my mouth with another plea. Brance lines up and slams into me. A burst of color blooms in my vision. I claw at the sheets and tumble under his spell.
Holy shit.
Brance’s hips grind against me, forcing us closer. There’s not a sliver of space separating our bodies.

When we’re alone again, I arch a brow at my date. “Same side seating?”
“Only way to appreciate these booths.”
“Oh?”
Brance’s palm rests on my bare thigh, drifting up and higher. “Yeah, babe.”
I spread my legs without hesitation. With one touch, I’m dragged under his seductive spell. Those talented fingers roam further, disappearing beneath my dress. I’ve never been more grateful for my choice in clothing. He reaches my satin covered center with no signs of slowing down. I really like the direction he’s taking.
“W-what are you doing?” My tone is barely a rasp.
Brance ghosts his lips over my cheek. “I’ve missed you. Just a little starter while we wait for the main course. Relax, babe.”

I sag against the seat in a pliable puddle, ready for Brance to mold me into his making. The rest of my resistance fades when he swipes across my slit. I’m so wet, almost embarrassingly so. Telltale tingles are already creeping up my legs. The thrill of getting caught. The tender warmth in his searing gaze. His strong strokes against my clit. It’s a recipe for a sharp and powerful climax.
I clamp a hand over my mouth and moan. Tremors wrack my limbs, an eruption cracking through the volcanic surface. My eyes roll back while I shudder in his grip. I do my best not to rattle the booth.
“You’re so fucking sexy.” His voice is a hypnotic pulse lulling me deeper into the waves of euphoria.