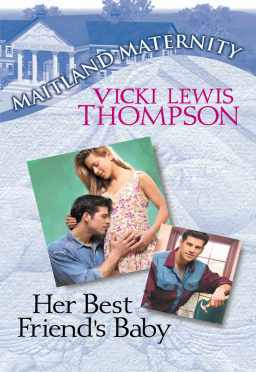 Her Best Friend’s Baby by Vicki Lewis Thompson is a novel that explores the concept of surrogacy, friendships, and crossing lines, which makes this for an emotional read. 22 year old Mary Jane Potter is carrying her best friend Arielle’s baby, the woman who had been a big sister, mother substitute, and her closest friend in the entire world.

When 31 year old Morgan Tate, husband to Arielle arrives on her doorstep late one night and gives her the devastating news of her best friend’s passing, that is the night when lines are crossed bringing these two together. Highly emotional and in need of human warmth and touch at such a time of deep grief, Morgan and Mary give into physical desire, complicating their relationship from then on.

While Morgan is adamant that a repeat of what happened that night is not possible, however as Morgan and Mary spends more time together and discover aspects of each other’s character they are both drawn to, the tug of attraction between them strengthens to a point where it is impossible to ignore. However, both of them do try valiantly for strength for as long as they can, until of course they give in.

It is not easy to accept that you have fallen hard for the husband of your best friend, a woman that you had put on a pedestal for the whole of your life. Morgan’s behavior is impeccable, the strength to his character and discipline evident for all to see, when he tries to do the right thing even at the cost of his own happiness.

There were many things that I loved about the book. Primarily Morgan who was such a sweetheart in every single way that counts. Not to mention Mary Jane, who infuses the story with a vitality that tugs at your very heartstrings. Vicki Lewis Thompson’s take on the concept of surrogacy and identifying the toll it could take on the surrogate mother was superbly done. Especially when it comes to someone like Mary Jane who would make a wonderful mother in her own right.

One thing that drew me to Mary Jane was her total and unabashed honesty which helped Morgan to move forward and accept things as they turned out to be. The fact that both Morgan and Mary Jane acted like mature adults rather than going the road of miscommunication with each other and creating needless problems between them as a result was welcome. Morgan being pulled from an otherwise lackluster life was one of the best bits about the story and the sexual tension and delivery on that front was done just right, totally deserving of what was blossoming to life between him and Mary Jane.

At first, I thought that the story line would not work because Mary Jane and Morgan get together too soon in the story. I was proven wrong because that was an elementally human response to the sudden loss of someone whom they had both loved and held dear in their own way. There was no ickiness factor because of what happened, and for that alone, I would say Vicki is a genius in writing about complex human emotions.

Recommended for fans of Silhouette romances and those who love stories that brim with hope in the best way possible.

Final Verdict: A story that brims with love, heart, and all the good stuff in between. Vicki Lewis Thompson definitely knows how to deliver a deeply and emotionally satisfying story.

“I’m not trying to make you feel better, damn it.” He could tell from her expression she didn’t believe him, and that’s when he finally lost it and kissed her.
Oh, God. She tasted like…the richest hot fudge sundae he’d ever had. He sort of went crazy—kissing her, and kissing her, and kissing her some more. He was afraid he also used his tongue quite liberally as he continued to enjoy her full, sexy, incredibly sweet mouth. His hands found their way to her bottom and pulled her in tight, and boy, oh, boy, did she fit.
She filled his arms in a way they’d never been filled before. He’d never held such energy, such excitement, such heat.

There’s nothing logical about the way I’m feeling right now.”
“Exactly.”
With a groan he pulled her into his arms. And heaven help her, she let him do it. Worse, she dug her fingers into his hair and coaxed his head down. She wasn’t going to be able to blame any of this insanity on him.
“I’m wild about caramel, too,” he murmured. Then he settled in to prove it.
During their first kiss in her kitchen she’d felt as if someone had pulled the pin on a grenade. This time it was as if someone had detonated a bomb.

He lifted his head. “We should go into your—”
“Stairs are nice.” She finished with his shirt and started on his belt buckle.
“But you need—”
“You.” She unzipped his jeans.
“A bed.”
“Later.” In an inspired move she slipped her hands inside the waistband of his briefs and slid to a sitting position, pulling his jeans and briefs down as she went. The maneuver gave her perfect placement.
“Mary Jane.”
She wrapped both hands around his solid penis. No wonder he’d felt so wonderful deep inside her that first night. She caressed him lovingly, and then she leaned over to kiss the straining tip.

Suspended halfway between sleep and wakefulness, drifting in a sensual haze, she closed her eyes. Lying on the bed limp and relaxed as a rag doll, she allowed Morgan to do as he would with her. He seemed to know exactly what to do with her, and he apparently required no participation from her to achieve his ends. He might even think she was still asleep and her body was automatically responding to his touch.
What a wild sensation, to be coaxed and kissed awake in every sense of the word. He cupped her belly with both hands, caressing her lightly as he continued his assault right where it counted the most. She was in heaven.