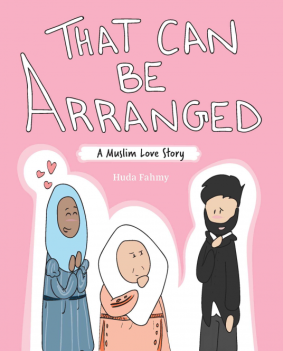 Huda Fahmy is a Muslim living in the United States, sharing her real life experiences in the form of comic strips published on Instagram. I started following her somewhere around last year; I mean who wouldn’t love the at times acerbic humor and wit that flows so smoothly through her meaningful comics that most Muslims can relate to?

When I found out that Huda was releasing her new book, That Can Be Arranged sometime this year, I have been counting down the days. That is until during one of my once in a blue moon forays into Netgalley served me with the best of surprises; this title was up for grabs for an ARC review. Quickly downloading it and reading through it in one setting, I was fascinated by the story of how Huda found her soulmate for life in Gehad her husband.

Islam is a pivotal part of Huda’s comics, and the way she so brilliantly imparts Islamic knowledge and wisdom without sounding preachy is something I have come to appreciate immensely in her work. As a romance lover, I loved Huda and Gehad’s story. As a Muslim, I loved it even more. Why? Because Huda’s real life journey towards finding her soulmate gives hope in a way not many stories can; that valuing your own self and loving yourself is a first step towards finding someone who would love all of you, imperfections and all of that. That is not a lesson that many learn before they make huge mistakes, which I believe for the most part Huda managed to skirt around.

Easier said than done, right? Huda too felt the same when she first started out on her journey, trying to fit certain molds that society can often project on your subconscious. The well-meaning family, both immediate and otherwise can often dampen the spirits of the most enthusiastic, especially when they have a tendency to kick you where it hurts when it comes to affairs of the heart.

Luckily, Huda is spared most of the heartbreak because she is strong in many ways from the onset, her mother and father being supportive of what she wanted for herself rather than trying to marry her off to the first thing that crosses over from the realm of eligible men. Her continued efforts towards learning more about her religion which actually brings her finally to Gehad and identifies in him her soulmate was beautiful in a way that is indescribable.

There is a certain allure in the way Huda combines traditions with that touch of modern flair which I identified with on a deep level. While I know that living as a Muslim, especially in a country like the US at a time when Islamophobia is on the rise and is rampant must be difficult, I did identify somethings that I wouldn’t mind having over here, a “100%” Islamic country as well. One of them being Muslim scholars who are more approachable and understanding of the unique challenges faced by Muslims of the world today. That in essence is a huge gap in most Muslim societies, the inability of scholars to get to the heart of the issues and reach out to the disillusioned among us. It is so easy to give into despair in a world that is so skewed in favor of the few, it is so easy to get lost in the fray.

In short, I loved it all. Recommended for anyone who appreciates humor and wit, combined with the belief that God indeed works in the most mysterious of ways.

Final Verdict: A unique portrayal of navigating the marriage market in a Muslim society, giving insight into the traditions and societal expectations on women, and a journey of self discovery and spirituality towards finding the one!