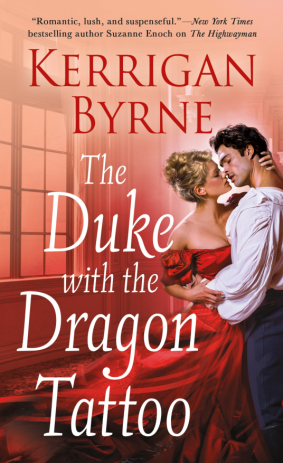 The Duke with the Dragon Tattoo is the sixth book in the delectable Victorian Rebels series by Kerrigan Byrne. It is also a much awaited story in the series, because the male protagonist is a character who has captivated the imagination of fans as someone totally ruthless and well deserving of his own happily ever after. Needless to say, I was super excited to pick up The Rook’s story at long last.

34 year old Lorelai Weatherstoke is about to take the plunge into “un”-holy matrimony as her hateful brother wants her to, when her savior comes in the form of the man who walked out on her 20 years back, promising that he would be back for her. But the eyes of the young adult he had been at that point in time had been gentler, warmer, and kinder. The ones that stare at her now remain placid, as if he feels nothing, sees nothing.

Taken “captive” aboard his ship, Lorelai is somewhat pacified to be accompanied by her sister in law who cautions her against trusting The Rook. While Lorelai’s heart tells her that beneath all that ruthlessness lies the man she fell in love with, her other senses tells her to flee and surrender in equal doses. Meanwhile, The Rook, not knowing what he wants out of the situation, sets in motion the sequence of events that finally allows him to uncover the secrets of his past that has eluded him since forever, to finally be able to surrender to the love that had found him even amidst all that stood in between them.

While I have loved most of the books in the Victorian Rebels series, because lets face it, Ms. Byrne is one helluva romance writer, I just did not find myself all that enamored with the main protagonists of this installment. Ms. Bryne’s stories are a favorite for a reason – they deliver ruthless heroes who are just a tad shy of being irredeemable, whose love for the heroine is an all encompassing one, rendering them possessive in a way that just melts you on the inside. At the same time, the heroines are able to accept the heroes as they are, with perhaps the hero turning a bit mellow in the hands of the woman who deserves their commitment and love.

I had a couple of issues with Lorelai to begin with. When Lorelai first encounters The Rook and and takes him under her care, even with all the dangers around her, she stood her ground wherever and whenever it was possible, which scored her points from me. She was in an untenable situation and she had the courage which I kind of felt was a missing element when the story picked up twenty years later. I just felt that Lorelai did not particularly seem as enamored with The Rook as he was with her as well. I know that it was hard to see where the hero was coming from at times, but who else would otherwise just turn up out of the blue when you are about walk into a nightmare of a marriage, and rescue you if not for love?

The fact that Lorelai seemed to have a problem with the VERY timely demise of her brother, the very brother who had tormented and tortured not only her, but the sister in law as well, when he would have basically murdered Lorelai if he could have gotten away with it, I just did not get her reaction. Given the time period in which the story takes place, I just had a difficult time understanding Lorelai from that perspective.

Perhaps she was too much of a bleeding heart even with all that she had gone through in life, unlike heroines from other books who seemed to take these things in stride, when it was a deserving hit to say the least. I for one smiled when the brother’s life ended with such dramatic flair – I would have clapped had it not meant I would have had to leave the book aside and also end up looking like a crazy fool. Maybe I am just too bloodthirsty as a reader!

The next thing that bugged me was perhaps largely to do with my expectations. I expected The Rook to be more ruthless than he actually was portrayed in his own story. I expected a darker story for him given all that he has gone through. When a romance ends up disappointing you in terms of the hero and the heroine and the connection between them, I guess that in a large way detracts you from the enjoyment factor you are looking for in the story. I can see though, that I am in the minority viewpoint when it comes to this one.

However, I really loved the ingenious plotting behind The Rook’s character; while I wanted dark and ruthless for him, what Ms. Byrne delivered was a twist that I could never have seen coming, not in a million years. I also enjoyed the connection between Veronica (Lorelai’s sister in law) and Moncrieff, the Earl of Crosthwaite (friend of The Rook’s). I think I was more taken in with the zing factor that Moncrieff brought to the novel than who actually should have.

Recommended for fans of the Victorian Rebels series.

Final Verdict: The Duke with the Dragon Tattoo adds a mesmerizing twist to the developing arc in the series, making one want to read the next installment just as soon as they are done with this one!

He wanted to savor all of her. Every soft, delicate, hidden part. Behind her ears, the supple curve of her bare shoulder, the taut peaks of her breasts, her quivering belly.
His tongue slid past her lips, enticed by the wicked fantasy he’d conjured. He lapped and nibbled at her in a warm mimicry of what he thirsted for.
An intimate taste of her.

Reaching down, he parted her legs so he could get closer, cursing every single layer of her skirt, her undergarments, and even the air that took up the space between them. He drove his hips against the silk of her skirts, sex against sex, frustrated by the barrier, but aroused by her soft hiss of breath and the tremble he felt roll through her limbs.
The first of many, he vowed.
“Can you feel a whisper of what I can give you?” he asked, rolling against her again, knowing he abraded the sweet little nub with each flex of his hips.
“Y-yes … but I…” Her fingers became claws on his shoulders, as though she feared falling.
I’ll not let you go.

A finger found its way inside of her, and she jerked, but he crawled up her body, soothing her with a gentle, probing kiss. His strokes became wicked, then torturous. Quickening in pace and rhythm until she surged in trembling, taut thrusts. Riding his fingers as she imagined one rode a horse, hips moving in time with the animal, urging it onward.
He slid another finger inside her, and she sobbed at the pressure of it. The pleasure of it. It threatened to annihilate her. To rush toward her with the speed and inevitability of a rogue wave, and there was nothing to be done but brace for the onslaught.

He crawled up her body, licking his glossy lips like a satisfied cat, his eyes glittering like volcanic shards of dark intent.
Her muscles, replete and heavy, melted beneath him.
“Did you mean it?” he asked tightly. “Can you take all of me?”
Sighing, she wrapped her arms around his wide torso with more urgency than even she had expected, her heart contracting with a thousand different forms of love. “Every part of you.”

The strain in his muscles as he held her aloft did more to stoke her desire than any poetry ever could. She released a rush of wet need on a tortured moan, and a tempestuous sound from him told her that he knew exactly what he’d elicited within her.
Lorelai let out an unbidden cry as he impaled her in one sleek thrust, setting her blood on absolute fire. He gave her only a moment to adjust, to dimly wish she were naked against all of his marvelous skin. 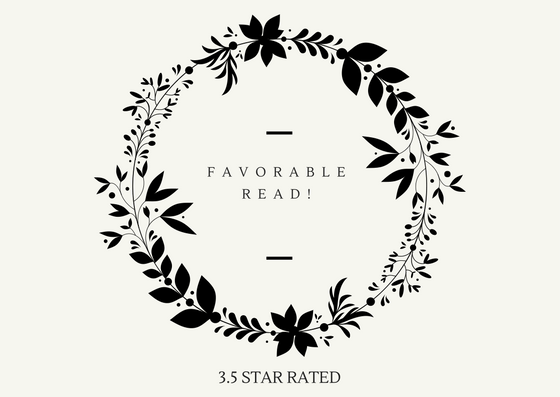