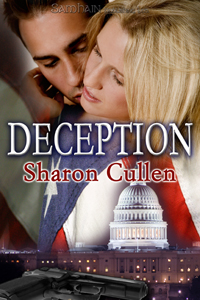 This is the first book in the Love on the Edge series. Got me interested in reading this after reading the second book in the series which I reviewed yesterday. I have got to say that this series is quite good and I will most probably read the third book in the series as well. Though I wish to read Eric (Kate’s brother’s) story, I don’t think that book has yet been published or written even although I hope that it would be sooner rather than later.

So onto the review. Lucas Barone is close friends with John Callahan. They served together in the top secret anti-terrorist organization for the government and it is in this story that the extent to which they were both betrayed comes to light.

Lucas and Kate has a history together before the novel starts. They had been dating and living together for over a year. Kate knows Lucas  to be a forensic accountant, Lucas’s thinking that the lesser Kate knows the better it would be for her. Although Lucas and Kate professed to love each other, Lucas just one day upped and left never leaving a clue as  to where he went off to.

Eighteen months later, Lucas turns up on Kate’s doorstep, injured and nearly at his knees from injuries received during an attempt to murder him at his home. Although Kate is reluctant to let Lucas once again into her life, she cannot turn away from Lucas when he is so vulnerable. So she nurses him throughout the night whilst Lucas promises Kate that no one would ever find out that Lucas was at Kate’s place.

However, the person who is out for Lucas’s head is way smarter and has more resources than Lucas thinks. Suddenly in the middle of the night, Lucas finds himself taking Kate along and running for their lives as someone tries to murder them at Kate’s home. Suddenly Kate is framed for murdering Lucas and everything goes haywire. Lucas takes Kate with him to the one place that no one except John knows about and hides out there with Kate.

Though Kate doesn’t want to be pulled into the life of someone who had deceived her so well in the past, she can’t help but be pulled towards Lucas and the attraction that has always simmered between them. Lucas has his own demons to fight, to forget the torture that he underwent at the hands of the terrorist organization that held him captive for three months in Peru. Kate too has her own secrets, a tragedy that has made her unable to be the person who she was 18 months earlier. Lucas and Kate together find the strength to forgive, heal and in turn give one another a second chance at what they had going between them.

However, when the moment of reckoning with the traitor comes calling, Kate nearly loses her life. In the end, its a sweet ending for these two characters who managed to wiggle their way into my heart. Lovely story.

I highly recommend for those who love romantic thrillers to  give this series a try.