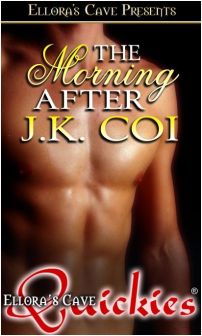 I usually refrain from reading Quickies because even though most of the time these quite short stories do pack a good punch, in the end I feel sort of cheated out because the story would have been wonderful if the character development had been more and the story just a teeny tiny wee bit longer! Even then, its always a delight now and again to read a good Quickie romance from Ellora’s Cave. When I came across this title, thanks to Pearl whom I follow on Twitter as well as on Goodreads, I knew with the 5 star ratings that this book had received already that it should be one hell of a read even for a Quickie and I must say I wasn’t disappointed.

The book comprising of just about 50 plus pages start off when Leslie wakes up after her worst hangover to find herself in bed with the last person she thought she would end up with – her husband Leo from whom she was in the process of getting divorced.

Leslie had grown up rich and pampered with her father Rick Jordan being a successful lawyer with his own law firm Jordan, Maxwell, Palmer. When Leslie had met Leo who is described as to have been a bad boy (which I would have loved to read more about!) her father had never taken to the idea of them getting together. Nevertheless, Leo and Leslie had been married for 7 years and they had been blissfully happy until it had all come crashing down.

Leo owns his own agency catering to movie stars, authors etc. When one of his clients had shot into stardom overnight, so did his business right alongside with it. For the first time since he married the love of his life whom he loved and adored with every fiber of his being, he was able to pamper her with all the luxuries that she had grown up with. But the demands on his time had been relentless from then onwards.

With the type of business that Leo has, it is inevitable that entertaining till the wee hours of the night goes with the territory. With Leslie being agoraphobic, she was ashamed of the fact that Leo had to leave her alone to do his business wining and dining most of the nights, but when evidence to the contrary surfaces, Leslie is forced to acknowledge that her cheating no good of a husband had lied to her in the end.

Without giving Leo a chance to explain, Leslie had thrown him out of their home and had her father run interference. For two whole months Leslie had been miserable in the knowledge that Leo had broken her heart. With her father dropping hints that he would like nothing better if Leslie moved on with David, her divorce lawyer who was the newest junior partner at his firm, Leslie had been scheduled to meet him at the night club into which her gorgeous husband had walked in with a platinum blond on his arm.

Leo had rescued her from inevitable disaster when the guy she had been flirting outrageously with had spiked her drink. Now lying in bed the morning after with her body yearning for her husband’s touch with Leo pulling all the dirty tricks up his sleeve to entice her back into his arms, the morning ends with one inevitable conclusion.

Even then, Leslie refuses to give Leo a chance to explain nor does she tell him why she left him in the first place. But Leo is relentless in his desire to find out and win her back and in the end, when Leslie does show him the evidence of his betrayal, a videotape of him having sex with his latest client, Leo’s explanation restores her faith back in the man who is her soul mate.

A story that is a quick and hot read that left me breathless at times, J.K. Coi should write more contemporary romances, albeit a little longer ones that we can sink our teeth into. A story with the underlying message that communication lines between partners should always be open, this is one Quickie all erotica contemporary lovers MUST read!