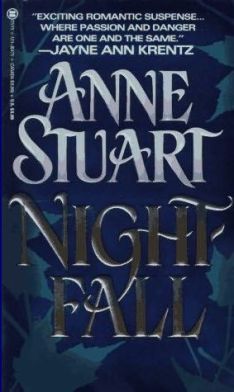 Anne Stuart definitely knows what she is doing with her bad-ass heroes who walk a fine line between inciting intense dislike or adoration despite of their broody and almost irredeemable nature in her readers. Night Fall caught my interest whilst going through her list of published  books and the fact that this story had won the RT Reviewer’s Choice award for the Contemporary Romantic Suspense category in 1995 convinced me to push this one towards the top of my TBR pile and I have to say that this is one romantic suspense novel that all lovers of this genre ought to read.

Richard Tiernan is certainly not your average hero in a romantic suspense novel. Yes he is handsome, compelling, charming and draws women towards him like iron towards magnet but what makes him a bit more sinister and edgier than your average alpha hero is the fact that Richard is a man who has been convicted for stabbing his beautifully angelic and pregnant wife Diana Scott Tiernan to death and the murder of his two beautiful children; 5 year old Amy and 3 year old Seth who to this day have never been found. It hadn’t taken much for a jury to find him guilty when Richard had done nothing to allay their suspicions. The fact that Diana had been about to leave him and had in fact filed papers to deny Richard access to their children had provided the motive that was needed for the conviction and his sentence had put him on death row to be killed by lethal injection until Pulitzer Prize winning novelist Sean O’Rourke posts his bail to use Richard’s story to pen his final masterpiece.

27 year old Cassidy Roarke had worked damn hard to make a safe and predictable and albeit a boring life for herself in Baltimore. Growing up with her father Sean who practically storms through life with his fierce bull-like nature and her mother Alice who had just been like Sean had definitely left its mark on Cassidy. Cassidy with her hour-glass figure, red hair and green eyes with her fierce protective nature knows that she will always fall short in her father’s eyes and that she would never be able to rise up and meet his expectations. Though she knows that putting herself in reach of Sean’s manipulative nature wouldn’t end up in a pleasant way, Cassidy is no match for her father’s wheedling and the news that he is sick propels Cassidy to travel to New York to see her father, her curiosity on why Sean had felt the need to manipulate her enough to require her presence being the deal breaker in her decision to go up to see her father.

When she arrives, she is hardly prepared to find a convicted murderer residing at Sean’s home, and Richard is exactly who Cassidy meets when she steps into her father’s apartment. The need to flee, to protect herself from the compelling man that stands before her rages an internal battle with her reluctant fascination for a man she is better off not knowing anything about. But Cassidy can’t help herself as Richard is determined that Cassidy fulfill the role that he has chosen for her, regardless of how much Cassidy might have to sacrifice of herself in the end. Ownership of Cassidy’s heart, body and soul is what Richard wants within the short time period he has left, and he uses all his acquired skill in drawing a hopelessly ensnared Cassidy into his trap until it is all too late when Cassidy’s well-honed survival instincts do kick in. What Richard doesn’t count on is for him to fall into a trap of his own making, for him to come to care enough to want to see the dawn of another day because of Cassidy.

I did not like: Nothing much but *sigh* again, the abruptness of how it ended kinda punched me in the face with this one as well. Though I know better than not to expect long and overdrawn epilogues from Ms. Stuart, it kinda still stings when the story is over long before you want it to be, like cold water up your ass before you have fully woken up in the morning!

She was literally backed into a corner, backed by her own nervousness, and he’d advanced on her. She raised her chin, looking at him with completely false calm, and waited for him to move out of the way.
He didn’t. Not for an agonizingly long time. He let his gaze fall, travel down the length of her, from her wild mane of hair, down to the front of her plain white nightgown to the tips of her bare feet. There was nothing even remotely suggestive about the cotton nightgown or the baggy sweater she’d pulled over it, nothing erotic about bare feet. His eyes slid down her body, and she was burning up.

He was angry. Angry that she’d reached him again. He stalked her, intent on testing her, seeing how far he could push her. And instead she’d pushed back, crawling inside his skin, so that it was his hands that were trembling, his body that was shaking.
She smelled like sex and lies. She smelled like love and truth. He threaded his hands through her thick mane of flame-colored hair, reveling in the texture and slanted his mouth across hers. He’d never liked kissing so much before.

She was unprepared for the sudden change in him. He’d been holding himself very taut, and suddenly the tension seemed to leave his body. He sank to his knees in front of her, his arms around her waist, his head pressed against her belly, and he was trembling. She reached down, in wonder, to cradle his head against her, and she felt the heat of tears against her skin, and her heart broke.

When she slept she dreamed. They would kill him, and they would make her watch, and she cried, reaching out for him. When she awoke she was sprawled across him, the room was still in the complete darkness of early morning, and he was buried deep inside her. She opened her eyes to look down at him, and the orgasm that shook her was powerful, instantaneous, and shared.
He closed his eyes, his strong teeth bared in a grimace, and she watched him. And she knew she owned him, as much as he owned her.