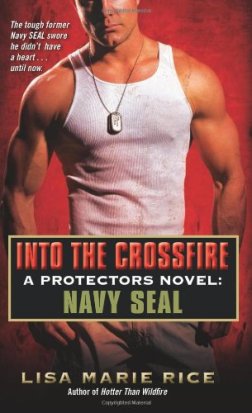 Lisa Marie Rice’s books are all about larger than life heroes that literally makes the pages come alive with their sheer masculinity and uber-alpha protectiveness. And her heroines are always ultra-feminine with a mighty fierce protective nature of their own that can surprise the reader a time or two. And her books always deliver the most sensually well done love-scenes that you can’t help but want more of where that came from. Into The Crossfire is done in classic Lisa Marie Rice style and the 1st book in The Protectors series was definitely a huge hit with me.

Sam Reston, former SEAL and owner of Reston Security is the type of hero any woman would wish to be by her side. As a baby Sam had been abandoned at a dumpster by his drug addict mother like a piece of trash and she had returned back for him when Sam had been around 8 years old spouting nonsense on being a changed woman ready to take charge of her son’s life. Life had been a nightmare for Sam during the couple of years he had spent with  his mother who had used up all state aide on booze and drugs, with the men who had inhabited her life beating the shit out of Sam whenever they got the chance. That era of his life had ended when a teacher had taken notice of what was happening to Sam for him to be placed in a foster home that had been run by a brutal couple. It is there that Sam had met his blood brothers Harry Bolt and Mike Keillor where 3 of them had had each others backs and looked out for one another till they had gone their separate ways. A blown up eardrum had ended Sam’s career as a SEAL where Uncle Sam had taken what he was by nature, refined it and spent millions of dollars to make him into one fine killing machine. A fierce protector of the weaker sex, Sam and his blood brothers band up to protect abused women and give them a fresh start away from the memories of the abusive lives that they had been subjected to till then. Now his own boss, Sam works hard putting scum of the Earth behind bars, going deep undercover for missions at times.

28 year old Nicole Pearce has led a charmed life till now and had grown up in consulates and embassies all around the world with her father’s career embedded in the diplomatic circles. Her father Nicholas Pearce was the most honorable man she had ever known and her parents had been the perfect example of a loving couple until her mother had been taken away in a brutal accident a few years back. Nicole had been enjoying living the single and carefree life working as a translator at the UN in Geneva until she had received the news of her father’s illness. With multiple brain tumors of the inoperable kind, the only thing Nicole’s father had wanted was to move back home to die in peace, something which Nicole moves heaven and Earth to accomplish for the man who has her undying devotion and love. Her love life had practically ceased to exist with all her energy going into starting up her translating business Wordsmith and being there for her father.

It is during one of those deep undercover missions with Sam looking like the worst scum to walk the planet Earth that he encounters classy and beautiful Nicole who at first calls Sam “Lowlife” in her mind. Not knowing who Sam actually is, Nicole pins the prickling awareness that hits her unawares whenever Sam is around to her distaste in his disreputable looks. Nicole is the type of woman that Sam has always stayed away from till now. From the moment Sam sees Nicole it is as if all other women on planet Earth has ceased to exist for him and Sam takes up on an opportunity to coerce a dinner date out of Nicole to woo her into his arms in true Sam style which totally backfires on Sam in the most delicious ways possible. Nicole is in for the surprise of her life when Sam defies everything she lays down on the table and sweeps her into his arms to give her the  most unforgettable night of her life.

It is quite by chance that Nicole is thrust into danger when she holds within her hands a document that can thwart a terrorist attack to be carried out on American soil by a Muslim mastermind working in the Wallstreet. Crippling the American economy and making Manhattan a radioactive wasteland by July 4th is their aim and nothing would sway them in their path towards the ultimate destruction of America and the West. When a ruthless killer known as Outlaw is dispatched to destroy the information and eliminate Nicole the brutal race against time begins for Nicole and Sam in identifying what it is that had painted a target on Nicole’s head. Filled with villains of the creepy kind, a hero who makes your insides go numb from sensory overload and a heroine who you just can’t help but fall in love with, Into the Crossfire is one of the best romantic suspense novels of 2010 for me.

1- Sam Reston. I don’t even know where to start with what he made me feel all throughout the book. Ms. Rice has done a splendid job in creating Sam as a fierce hero who wouldn’t hesitate to die for those whom he loves. His sheer masculinity just leaps at you from the pages making you want to rub your hands all over him.  His utter focus on Nicole and the way she calls to that elusive something deep inside of him and because Sam doesn’t hesitate to claim her as his and treat her right, Sam earns all the love reserved for romance heroes and then some deep within my heart. ^_^

2- I loved the sensations that coursed through me as I read through each and every encounter between Sam and Nicole. I don’t know how Ms. Rice does it but I practically forgot to breathe through Nicole and Sam’s first encounter of the against-the-wall variety as Sam blazed through and Nicole urged him to put to an end the sensory overload that had begun in earnest right from the very beginning of the novel. I think the name Sam has something to do with hot-as-sin against-the-wall-encounters. Brings back good memories of Sam and Jaine going at it in Mr. Perfect by Linda Howard. ^_~

3- Nicole Pearce. She is beautiful, classy and down-to-earth as they come. Her fierce love for her father and her undying loyalty towards him during his last couple of painful days left made her one of the most endearing heroines that I have read about. Totally loved her! And yes, she is perfect for the silent and strong Sam in every way!

4- Tthis story left me begging for Mike and Harry’s story to be told. Harry’s story “Hotter than Wildfire” is to come out next March and I literally am rubbing my hands together in glee at the mere thought of it!!

Dislikes: Sometimes the numerous references to Nicole’s dying father and the circumstances that had forced her to give up her wonderful life and come to her father’s aide gets to be a bit too much. Yes, we all know that Nicole’s father is sick, terminally ill and that she had given up everything to come take care of him. Repetitive explanations of the circumstances gets a tad tiring after a while.

Trembling, feeling as if she were stepping through an invisible barrier into another life, Nicole entered.
The house smelled good — of clean textiles and lemon polish and the sea breeze coming in from an open window, white cotton curtains billowing with the wind coming off the ocean.
A hiss, a metallic whump behind her and the door was closed and locked.
She was in.
She was going to do this.
Oh yes.
The next second her back thumped against the door and Sam Reston’s entire weight was against her as he kissed her wildly. Not the fragile, tentative kiss in his car. Oh no, this was as if he were trying to inhale her, while punching his skin through hers. A deep kiss, wild, going on forever.
Oh God, his taste! Like a fresh mountain stream pumped full of male hormones, calculated to drive any woman wild. His mouth ate at hers, coming at her from various angles, as if one weren’t enough. And it wasn’t.