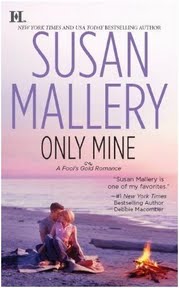 If not for a request for review from Little Bird Publicity I would most probably have passed up on reading and acquainting myself with the wonderful and wholesome world that Susan Mallery seems to have created so well in her Fool’s Gold series. As I glided along into the 4th book of the series with no prior introduction into the first 3 books, I didn’t feel unwelcome but rather felt that I was amongst old friends whom I hadn’t seen in a long time, familiar and soothing in its own right that had me falling gently in love as I read along.

28 year old Dakota Hendrix is a triplet, and comes from a family of six siblings, her family being one of the first generation families in Fool’s Gold, California. Fool’s Gold is a town that has shot to fame after a student doing her thesis on human geography had discovered the fact that in Fool’s Gold there is a serious lack of men when both sexes are compared in numbers.

A PHD holder who specializes in childhood development, Dakota has no idea why she is entrusted with the job of looking out for the interests of the citizens of Fool’s Gold in the project undertaken by Hollywood’s attempt to make money out of their town’s lack of men.

When Finn Andersson with his black hair and piercing blue eyes storms into the scene demanding that his younger twin brothers Sasha and Stephen who have signed up to be part of the reality show True Love or Fool’s Gold be released from the show, Dakota has no idea that Finn would be the man to stir up her juices and get her to notice the attention her inactive libido seems to be dishing out to the sexy stranger.

Finn who hails from South Salmon, Alaska is determined that his younger brothers would not ruin their lives by setting out on a fool’s errand. Finn is a man who takes his responsibilities very seriously, some might say a bit too seriously considering the fact that he had had to grow up overnight to take care of his 13 year old younger brothers when his parents had died in a plane crash 8 years back.

When Finn realizes that the twins won’t budge from where they stand, he does the next best thing a protective older brother would do; decide to stay around in Fool’s Gold to keep an eye on them until they realize the error of their ways. However, things rarely have a way of turning out as one plans them and this is exactly what happens when Finn finds himself looking forward to staying around in Fool’s Gold, thanks to the number Dakota plays on his baser and more tender emotions.

Only Mine is not just the story of how Finn and Dakota falls in love and finds their happily ever after. Rather, its a story that intrinsically weaves together the beauty that is small town life, the wonderful togetherness one finds inside the warm circle of loving family members and friends and the realization of the hopes of a woman who dreams of holding a child that belongs to her in all the ways. It is a story that tells the struggle of a woman who wants to stand up for herself and finds love and the strength to do so in the most unexpected of places. And last of all, Only Mine shows us the beauty of a relationship that is based on sharing the burdens of life together, and that love does triumph over every other emotion in the end.

I loved a lot of things about Only Mine. First of all the soothing feel to the story that unfolded was truly appreciated. True, there were emotionally charged moments and times where I was in dire need of a tall glass of iced water to quench the heat coursing through me. But ultimately, the one thing that does shine through is the fact that Only Mine is a novel that soothes and provokes your emotions at the same time, making you feel like you are snuggled up in bed on a rainy day with a warm cup of tea right by your side.

All the characters in this story, whether they were around for the long haul or just popped up in between were endearing in their own rights and lent the story the charm that it fully exudes in spades. The secondary story of the unexpected love between Stephen and the 9 years older Aurelia certainly made things more interesting. The details and the emotions that the author fully describes about the heroine’s attempts at overcoming the limitations that PCOD (Polycystic Ovarian Disease) imposes on her life and the way she wins over them hit close to home as I am someone who suffers from the same condition.

At times funny, charming and endearing, Only Mine is a novel recommended for those who are fans of Susan Mallery; those that love a soothing, feel-good romance with in-depth characterization and fans of the Fool’s Gold series.

Dakota touched her (mother’s) arm. “I’m dealing. Most days it’s okay. Sometimes it’s hard to get out of bed. Maybe if I’d been in a relationship, I wouldn’t have felt so unlovable.”
“You’re not unlovable. You’re beautiful and smart and fun to be with. Any man would be lucky to have you.”
That’s what I tell myself. Apparently the entire gender is blind and stupid.”

She welcomed him, wrapping her legs around his hips and drawing him closer. Usually she closed her eyes, but this time she kept them open, watching him watch her.
They were connected. She felt what he felt, knew his anticipation, experienced the tension. As he got closer, so did she. The need for more grew until there was nothing to do but come together.
She clung to him as he held on to her. The night closed around them until it seemed as if they had always been together and that they could never ever be apart.

Susan Mallery is holding a contest up on her website from 1st August till the 1st of September 2011 entitled “ONLY MINE … All Mine”.

The contest will be open to all members of Susan’s website who sign-up for a chance to win. It will begin August 1st and will end September 1st, 2011.  Once the contest has ended one lucky winner will be randomly drawn. The one lucky winner will receive a signed “exclusive first look” at Susan’s new Fool’s Gold Christmas e-novella (so fresh it doesn’t even have a title yet) and a man shortage t-shirt.

Signing up is so easy. Just visit: http://www.susanmallery.com/members/contest.php!