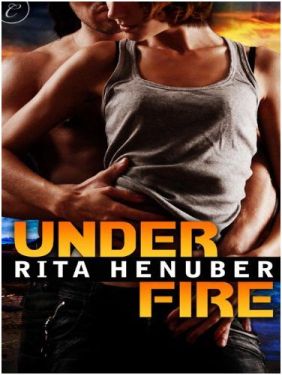 I am a little bit late with my review of Under Fire by Rita Henuber. Work has been a bit crazy and with other obligations taking up my precious reading time, I have been a bit swamped so to speak. But I am a girl who always believes in the “better late than never” adage and though my review is a trifle bit late in coming, it comes with all good tidings and recommendations for fans of the genre to give this one a try!

Rico Cortes is a DEA agent who has been working deep undercover in the midst of Miami’s drug world. With a past that has put him on a course to do his bit to rid his country of drugs, Rico is at the verge of wondering who the real Rico is as his job pulls him deeper into a world filled with treachery and deceit.

Coast Guard Lt. Commander Olivia Carver is one determined woman, whose twin brother Danny was murdered whilst working undercover in the Miami drug scene. Her vow to avenge the death of her twin is one that constantly rings through her very soul and the only thing that stops her from quitting her job to embark on a full fledged search for the killer is the fact that her position brings her intel that she otherwise would not have access to.

When Olivia and Rico’s worlds collide, a meeting machinated by Rico in order to throw Olivia off the course of Rico’s investigation, the one thing neither counts on is the volatile sexual need that practically wipes every other thought from their minds. A one night stand that leaves both wanting more takes a darker turn when Rico is forced to make use of Olivia in their joint quest to bring their mutual enemy to justice – or wipe him off the face of the Earth once and for all!

Under Fire is an appropriate title for a book which is filled with action of the heart pounding variety that never lets up. The constant kick-ass action that is always a part of this story held my undivided attention as I sped through the pages. With a thrilling chase that kickstarts the story sets the tone for the whole novel as Olivia and Rico pulls out all the stops to lure one of the worst drug lords in their country to his ultimate demise. I loved the fact that Rita Henuber doesn’t pull any punches and delivered that realistic edge to the action, not doing a complete 360 degree turnabout at the end where forgiveness and doing the right thing takes precedence over the goal that had been set at the beginning.

The passion that ignites between Olivia and Rico is one to be savored in the story. Though the scenes aren’t explicitly detailed each and every single time, Rita does know how to keep the adrenaline pumping with the constant arcs of awareness that leaps forth between Olivia and Rico. I loved the heat and sultriness of the first encounter between them and I’ve just got one word for Rico – HOT!

For me, though Olivia tended to be the centrepoint of the story as it unfolded, Rico’s character turned out to be the most endearing one. His painful past when it comes to light made me want to wrap my arms around him and never let go. As the shades of his undercover persona is left behind bit by bit, there emerges a man that wants above all to do the right thing and to find that one person in the world who would love him completely, his darkness and all.

Olivia makes for one kick-ass chick, whose sheer determination to find her twin brother’s killer obliterates everything else in her life – even her burgoening feelings towards Rico. I think it was because of that reason that I couldn’t completely warm up to Olivia’s character towards the end though she makes you want to learn one of those few dangerous manueuvers of your own to dish out every now and then.

The humor that is so intrinsically woven together in a story that practically vibrates with adrenaline overload turned out to be one of the reasons I kept coming back for more of Olivia and Rico. I kept going LOL even during those tense moments fraught with either danger or sexual tension that just somehow seemed to fit right in making this romantic suspense a well balanced one.

One of my peeves with the book turned out to be how things ended in the story. I was clamoring so bad for an epilogue that would depict Olivia and Rico as a couple, maybe a couple of years in the future, both settled in and adjusting to life at a different pace than the ones they have led up till and throughout the story. The way how things ended is the only reason that prevented me from giving this one a whopping 5-stars though Under Fire still makes for an awesome read!

Recommended for those who love their heroines to be of the kick-ass variety, their heroes to be ultra sexy and for the story to practically burst at the seams from the continuous stream of non-stop action!

(Rico) “What’s it going to take to get you to dance with me?”
She crooked her index finger and motioned him to come close. “A million in your bank account and seven inches in your pants.”
Without missing a beat he replied, “The million I have, but even for a woman as beautiful as you, I won’t cut off three inches.”
Olivia’s eyes went wide and she burst out laughing.

(Rico) “Can’t wait.”
“Neither can I.” She prepared herself for another go-on-forever kiss. It didn’t come. Between gentle darting kisses, Rico nibbled her lips while his hands explored her body. Olivia moaned. She couldn’t help it.
The sound seemed to trigger something in Rico. Now the kissing was hard, wild and insatiable. Strong arms circled her, big hands covered her buttocks and yanked her against him. Without stopping the kisses or separating their bodies, Rico maneuvered them to the passenger side of her Jeep.

She closed tight around him, pulsing. Rico’s fingers dug into her hips. His movements quickened and he found his rhythm. She wrapped her legs around his hips as his body arched, tensed and shuddered with his own release.
Someone growled. Him, her, she didn’t know. Her blood pounded so hard and loud in her head she couldn’t be sure.

(Olivia) “I’m stopping at the next exit for gas. I’ll get rid of the scrubs. You get out and walk around or by the time we get to Miami you’ll be too stiff to move.”
“Don’t worry, when I get stiff I move very well,” he muttered as he turned to face away.
“I heard that.”

He (Rico) moved to look at the speedometer.
“Come on, Olivia. The speed limit is 70. You’re doing 95, and this car is ticket bait. I don’t want to risk getting stopped.”
“I’m traveling with the flow. This is I-95. If I go the speed limit I’ll stand out.”
He scowled.
“Okay.” She slowed the Corvette.
“Thanks,” he muttered. “You always drive like this?”
“Yep, I grew up in Texas. Speed limits there are only a suggestion.”

(Olivia) “What is all of this, your James Bond room?”
“You could say that. It’s my backup.” He opened cabinets, took out a pill bottle and downed a Percocet. “In here I have weapons, computers, transportation, medical supplies, money and anything else I might need for my survival. Things we’ll need to complete this job.”
Olivia ran her fingers across several of the weapons on the counter and shelf. “Where’s your toothbrush radio and exploding briefcase?”