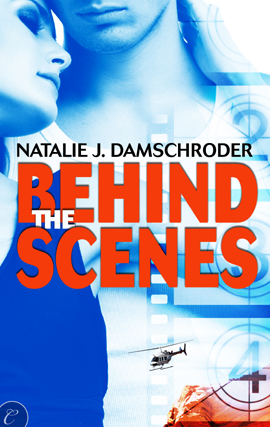 Behind the Scenes By Natalie J. Damschroder is the second novel by Natalie that I have tried out, which is set to release from Carina Press on the 31st of this month. Though I have managed to read just two of her novels, there is a theme that rings constant in both her books – you get heroines of the kick-ass variety that drive the story forward and heroes who are a bit laid back than the usual alpha heroes that we all clamor for.

Kennedy Smyth is the owner of  SmythShield, a small security company focused exclusively on projects with a humanitarian goal. It had been the death of her beloved brother working in one such project that had kickstarted Kennedy’s efforts and it had taken her 10 years to bring SmythShield to its current level and status.

When Kennedy receives a request to monitor the security of the movie shoot of Coming of Day because of terrorist threats that a few selective members of the cast and the director of the film has been receiving, Kennedy’s first impulse is to say no and take on a project more related to what she usually handles. But in the end, Kennedy says yes and finds out that she had completely underestimated the level and focus of the threats that have been following in the wake of the shootings since the beginning.

When the handsome and sexy movie star Rogan St. James comes into the picture, Kennedy has no interest whatsoever in pursuing the curl of desire that leaps forth within her. A woman focused on her work and the pressure that it brings to her life is who Kennedy is and she has no intention of  changing that anytime soon.

Rogan is a laid back version of alpha heroes who doesn’t get as much time as I would have liked in the story. But the scenes that he does appear in, he does make them count and I think Rogan’s brand of laid back persuasiveness was exactly what Kennedy needed in order for her to see that sacrificing her whole life for the greater good of mankind isn’t all there is to living.

Kennedy who hates showing any sort of vulnerability knows that the first time in ten long years she is in danger of doing just that when bit by bit Rogan invades her thoughts, dreams, desires and then her life until the threats start focusing on the object of her affection. Though Kennedy tries her hardest to keep Rogan at bay, Rogan seems equally determined to do the opposite leaving her with no choice but to embrace his love in the end.

Behind the Scenes is very much an action driven suspense novel with bits of romance thrown in. Kennedy is a tough heroine, who makes it really hard for anyone to get close to her; her worst nightmare being that if she gets close to someone, he or she might be the target of enemies that she has accumulated over the past years. Her focus and intensity when it comes to the job at hand is awe-inspiring and humbling at the same time.

Rogan though he doesn’t play an overly major role in the story, turned out to be an endearing and sexy hero whose intention of never getting involved with an actress or a woman whose too driven goes up in flames when his attraction towards Kennedy develops into something much more than he ever envisioned. It is how Rogan seems to know exactly when to advance and retreat with Kennedy that seals the deal with her. Rogan has reserves of patience and of course the wisdom to let Kennedy be true to herself even when circumstances look pretty harrowing.

I liked the overall premise and the setting of the story. A female heading an exclusive security firm is a novel concept and the constant danger and action that is seamlessly integrated into the story makes for a compelling read. Though I felt that the romance aspect of the novel didn’t get an equal amount of attention as the suspense part, Behind the Scenes still managed to keep me turning the pages. I felt that unveiling who the villain turned out to be took just a tad longer than necessary because by the time the story hits the last couple of chapters it is pretty obvious who the villain is.

Rated as good read, Behind the Scenes by Natalie J. Damschroder is recommended for those who love action driven suspense novels with kick-ass heroines leading the story.

He propped his hands on his hips, shook his head slightly and turned his gaze from the front of the building to meet her eyes, dead on. “It sounds ridiculous, but I want you to have dinner with me. Since we have an early night.”
Those truths clamored louder. She shook her head.
“Why not?”
“I don’t have time, Rogan.” […]
“You don’t have time to eat?” he asked.
Kennedy blew out a breath. “I don’t have time for dating games.”
“Good, neither do I.”
“Then what’s this?”
He let go of her and lifted his shoulders, hands out. “Flirtation?”
Something intangible popped, and the tension faded. She smiled. “I expected you to say foreplay.”

Rogan caught her hand just before she got out of his reach, and tugged her slowly back toward him. His eyes met hers, and she realized just how good an actor he’d been for the last few days. Where before she saw mild interest, now she saw intensity. Need.
Purpose.
He put his hand on the back of her head and dipped down for the kiss she’d daydreamed.

[Rogan] “I’ve been watching you, and you’re more confident and decisive than any woman I’ve ever known. There’s no pretense to you. No concern that what you’re doing is the wrong thing, or that you’re not doing it right.”
“And you don’t like those traits in a woman?”
“I do. I didn’t know that until I found them.”

What he’d wanted before had crumbled away, leaving the truth of what Kennedy did to him. It was new, and there was a long way to go before it could be right, but that was the path he wanted to take.

She stepped forward into the shadows with him and took his hand. “What do you want from us, Rogan?”
He shuddered with the force of his expelled breath and intertwined his fingers with hers. “I’m not sure.” He brought their hands to his lips and rested them there, not kissing or licking or being seductive, just touching. “I think I want it all. I’ve barely kissed you, but I already know it won’t be enough. Even sex won’t be enough. You’re deep in my system.”