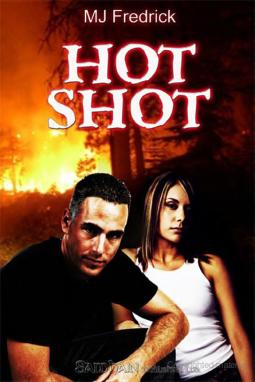 Hot Shot is one of the earliest novels by MJ Fredrick and nevertheless a great one that makes for a compelling read. There is a reason why I continue to read books from her entire backlist because I know that she won’t disappoint me when it comes to the action, the suspense, the romance and of course the happily ever after that she delivers in her stories. MJ Fredrick tends to write stories that not only deliver a good dose of romance between two likable characters but delivers stories that tend to be quite informative on the chosen subject matter and Hot Shot is no exception as this story deals with the dangerous and arduous task of forest fire fighting.

Gabe Cooper is the leader of the Bear Claws, the best Hot Shot crew in Montana. He is cynical and world weary, the only consolation he finds is in the dangerous and adrenaline pumping job of fire fighting. He is a legend amongst the fire fighting circles and considered the best in the field.

32 year old Peyton Michaels is a reporter from Up to the Minute magazine, who has done a series of successful articles called “In the Line of Duty” that focuses on those men and women who put their lives on the line everyday as part of their duty, just so that the rest of the world can stay safe. Peyton’s latest article brings her to Gabe’s group, as a rookie as well as a reporter, a combination that stirs up resentment on Gabe’s part right from the very first moment.

From the start, danger surrounds them and constantly pursues them at every turn. And in the midst of these life threatening fire fighting and rescue missions, Peyton and Gabe slowly start to find out that the attraction between them is one that won’t be denied, their connection to each other one forged in the midst of danger and at times at their lowest point of endurance.

With a few twists and surprises along the way, Gabe and Peyton hunt the person responsible for starting the fire in the first place, a fire that continues to claim lives even while they are on the hunt. And in the midst of everything, Peyton and Gabe are forced to confront their innermost feelings towards each other and open up about their deepest and darkest secrets so that their love turns out to be a that much sweeter one at the end.

The way Ms. Fredrick creates stories wherein lies complicated relationships, not necessarily between just the hero and heroine is one aspect of her novels that I just love. In Hot Shot, Gabe is the one who has to face his ex-wife Jen, who betrayed him after 4 years of marriage by falling in love with his best friend. To have to work with Jen 3 years after the betrayal when feelings for Jen still courses deep through Gabe creates a mother-load of tension and angst that Ms. Fredrick handles very well. And on top of that Gabe has to confront the way his feelings go into a tailspin for Peyton, bringing down the bitterness, heartache and loneliness that Gabe had hides well from the rest of the world.

Gabe is a legend, a hero, but the labels don’t mean anything to him as long as he can battle the dragon day in and day out and come out winning. Some might label him an adrenaline junkie but in my perspective Gabe had been waiting for something else in his life that would give him the same sense of satisfaction and accomplishment that fire fighting gives, and in Peyton for the very first time he finds a reason to change his life, a woman who accepts him just the way he is.

Peyton is a widow, whose husband’s death is still etched on to her mind as clearly as if it happened yesterday. Peyton’s grief is expressed through her articles, by trying to find out what makes those that put their lives in danger in the name of duty do what they do. And when she meets Gabe, the man who stirs her senses up and makes her come alive for the first time in two long years, she is more than dismayed at the thought that she is once again putting her heart on the line with a man who thrives when danger surrounds him. But as she discovers more about Gabe, the more Peyton comes to understand what drives him, what had driven her husband to constantly confront danger until that very last day, the acceptance and healing that both Gabe and Peyton find together being one of the best parts of the story.

The fire fighting scenes are so realistic that sometimes it felt like the scene was playing right in front of my eyes. And within those adventurous moments, Ms. Fredrick provides a whole lot of information and details about forest fire fighting that made me an instant admirer of the men and women who are courageous enough to battle the fires that rage every year.

Recommended for fans of romantic suspense that feature fire fighter heroes and fans of MJ Fredrick.