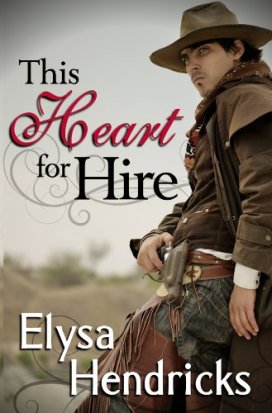 This Heart for Hire by Elysa Hendricks takes place in Texas in 1870 and brings together the tough gunslinger Jake Gallagher together with the innocent and convent reared Christina Goodwin amidst the violence and harsh beauty that was life in the wild west.

Christina is on the run for her life with her brother Christopher in tow when Christopher is killed at the hands of bandits who seemingly wants to have their way with her. Rescue comes in the form of Jake Gallagher who to Christina looks to be the lesser of the two evils. When Jake gets injured on the run and it is on Christina he depends on, it is on sheer guts alone that she survives the next couple of hours.

When Jake recovers from his injuries, he has no recollection of who he is or any memories of the past 2 years of his life. All that he knows for sure is that he would lay down his very life for his angel, the woman who draws him to her unlike any other. It is Christina’s gentle innocence and her natural curiosity when it comes to the desires of the flesh that keeps drawing Jake to her like a moth towards flame. And to Christina, Jake epitomizes everything that has been forbidden to her during her 12 years in the convent. And when love enters the equation, there is no stopping her from claiming Jake as hers, even with Jake doing all that he can to keep her at arm’s length.

This Heart for Hire is not a light fluffy read. Elysa Hendricks does a splendid job of bringing her characters to life and paints a vivid picture of the harsh realities of life in the wild west. But that doesn’t mean that this story is all filled with dark moments. Contrary to that, the story contains beautiful moments as well as moments taut with the sizzling sexual tension that flares up between Christina and Jake from the very beginning. And then comes the harrowing couple of last chapters where reality intrudes and Christina experiences the violent reality of bandits who towards the end have an agenda of their own when it comes to her.

Christina might be the gentle innocent in the story. But even then, she is a woman who has a depth of courage that we begin to see when push comes to shove, her determination to escape and take revenge on the men who so callously violates everything she has been taught till now the burning fire that keeps her going. Her need and love for Jake shines through when he is around, but the way he pushes her away, one time too many makes her stand up for herself.

Jake is tormented throughout the story by the lack of his memories which aren’t as forthcoming as he would like them to be. With a void in his past and the possibility that he might be a wanted man by the law makes him push Christina away time and yet again. Jake continues to deny his need and love for the woman who invaded his heart much earlier than he would care to remember until Christina is nearly snatched away from his life for good.

I loved how the story came together and brought along with it its fair share of surprises along the way. There were moments where I was like “Heck, I didn’t see that one coming”, which is always a good thing when you are reading any sort of book. And I loved how elements of both Jake and Christina’s pasts entwines them together, fating them to be the better halves of one another for the rest of their lives. The one thing that could have made this book that much better was the end to Christina’s attempts to reach her uncle which was unresolved even when the story ended. I would have loved a bit of a lengthier end to the story, maybe an epilogue at that, which could have shown the happily ever after that Jake and Christina fully deserves.

Recommended for fans of American Western historical romances. Elysa Hendricks spins a tale that is hard to put down.