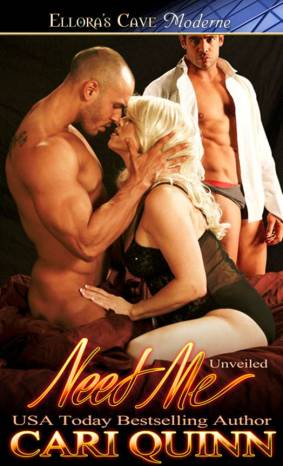 I ‘blame’ Cari Quinn for daring me to go where no author has ever enticed me to go. That is to dip my reading toe into the world of ménages and God forbid, enjoy them too while I am at it. Thought I’ll never become an auto-buyer of every ménage romance that is out there, I’ll still make that exception for a few select authors out there, who I know would always make whatever trope they explore work for me, and Cari Quinn has always been such an author for me.

Need Me by Cari Quinn is the 3rd book in the Unveiled series. The 2nd book in this series is an absolute favorite of mine and the hero Spencer someone I always remember, yes, because he is that very good! And of course with the cast of all the characters Cari introduced along the way enticed me enough to want to read Need Me as well, although this story explores heavily on the ménage aspect, which I might have totally skipped altogether if it hadn’t been for Cari.

Marcia Galvin Daly is about to hit her 40th birthday soon and dating Antonio Marcus Griggs (Tony), a guy who is younger than her by almost 10 years and adores her to no end. Marcia is as wild as they come, a woman best accepted as who she is, because Marcia is someone who refuses to bend to the rules and mold herself into something she is not and pretend to be someone she would never be.

When Marcia realizes that she has developed a forbidden attraction towards Tony’s best friend Caleb Parker and knows that she doesn’t have what it takes to turn away from the temptation that he offers, Marcia does the next best thing and decides to write a sex manual of sorts that would let her explore possibilities in her sex life that she has not tried out yet. When her boyfriend Tony offers her exactly what she wants; a night with him and Caleb in the mix, Marcia thinks that it would just be one night of torrid sex; nothing more nothing less. However things change, not in the way Marcia expects them to, and forces both Marcia and Tony to accept and realize the true nature of their feelings for each other and in the end gave me the sort of ending to this story that I just loved.

First of all, let me just say that Caleb Parker is hot, and I don’t think there is any scale on the hotness meter that he would fit into. He has this broody, edgy quality to him that just begs and entices a woman to want to explore the depths of pleasure she is bound to find in his arms and I for one couldn’t find it in myself to fault Marcia for her attraction to him because Caleb’s character demands nothing less. The fact that Caleb’s character remains a ‘mystery’, as in his feelings are not explored in depth in the story just made his character that much more alluring and I’m absolutely dying to see where Cari leads him to. Am pretty sure that either way his story is one that is going to end up being an explosive read, one that would be a definite panty drencher.

That brings me to Tony’s character. He is such a sweetheart that its hard not to fall in love with him right from the very start. The fact that Tony understands and accepts Marcia, the woman he loves unconditionally is reason enough to love Tony. And of course there is this totally sexy, take-charge attitude in him which he lets loose around Marcia that is such a turn-on that even Caleb seemed to fade away in comparison during those moments.

Marcia is the character that stirs things up and makes things happen in the story. She is the rule changer in the game and though she starts out thinking that one night of hot torrid sex with Caleb in the mix would not change anything, she finds that the dynamics of her relationship with Tony changes along with it and that she is willing to do whatever it takes to belong to Tony and him alone and that he alone makes her want to move past her fear of committing herself to one man for the rest of her life.

Not surprisingly, though the bits where Caleb, Tony and Marcia made the ménage thing work in the hottest way possible, it was those moments between just Marcia and Tony alone that I loved best. So much emotion in their lovemaking that it moved me in ways I’d never have thought possible and I’m just going to put it out there and say that those moments turned me on more than the most explicit moments in the story.

Cari Quinn always has that ability to make me smile, squirm, hum and sigh at all the right moments and in all the right places. Need Me delivered exactly a dose of just that and I’d recommend this to everyone who has loved the Unveiled series so far and of course those who love Cari’s books and also those who love ménage themed romances. Hot doesn’t even begin to cover what Caleb adds to the mix.

Her lids lowered, her thick dark lashes sweeping her cheeks. As if she’d been waiting for permission, she lifted her hips against him and knotted her fingers in his hair. She yanked his face closer, parting her lips for him to invade her mouth. With sexy and slow pulls on his tongue, she wreaked her own brand of havoc on his mind and heart.

She flicked her tongue over his lips and sank into his hot, endless kisses. Every inch of her body belonged to him, her every molecule and nerve in sync with his. So good. No, it was better than good. This was the best sex of her life, with the man she loved and who loved her right back.