Yes, its being ages since I’ve had one of these posts up on my blog. Don’t blame me, I just haven’t come across any books good enough to warrant a pick of the month post for like almost a year. I am partly to blame of course, for having lost my zeal to read as much ever since the political turmoil in the country began last February. Its going to be a year on the 7th of this month since the coup happened in the Maldives, something the rest of the world seems to have forgotten.

So before I go rambling about my sense of desolation about democracy and the loss of people’s rights, please welcome author Sarah Mayberry who as usual was wonderful enough to answer my questions regarding her January 2013 release, The Other Side of Us, which was practically the most wonderful read I have read for quite some time. And lest you may have forgotten, there is always a giveaway included with the interview.

The Other Side of Us by Sarah Mayberry 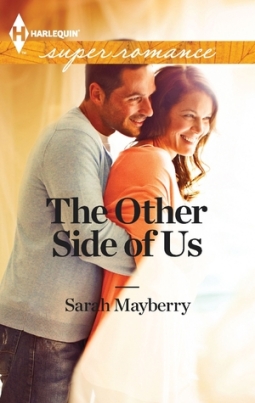 MBR: How did you come up with the premise and the story line for The Other Side of Us?

SM: I was talking to my lovely fellow Super Romance writing friend, Joan Kilby, and she was telling me about how her dog, Toby, used to sneak through the fence in their previous house so he could go play with the dog next door. She said no matter what she did, that dog was a Houdini, and they could not keep him on their side of the fence. Well, that got my story brain ticking over. What if two people who didn’t really want to know each other were forced to do so because their dogs kept hooking up? Which then got me thinking about why these two people didn’t want to know each other… and I was away. At first I wanted Oliver to be the one recovering from injury – I thought I might even make him a cancer survivor – and I was going to make Mackenzie the one who had been betrayed for almost the entirety of her marriage. But then I decided to flip things, make her the loner curmudgeon and him the betrayed one, and all of a sudden my story brain was REALLY going crazy.

MBR: You always manage to leave messages in your novels on those little and not so little things that makes a relationship work. Do you make it a point to do that or does it come naturally as you plot the story?

SM: I don’t consciously think about adding those elements, but I do always strive to really show readers that these people have a genuine, heartfelt connection that’s about more than smokin’ chemistry. I really believe friendship is the foundation for any lasting relationship – a genuine liking for each other as well as love – and I am always looking for ways to show that my hero and heroine enjoy and “get” each other.

MBR: Whose character would you say was the hardest to write in The Other Side of Us and why?

SM: You know, both Oliver and Mackenzie had their challenges. I didn’t want to make him too mopey and angry, but I wanted to also be true to where he was in his life – ie recently badly burned and betrayed. And I knew that some readers might find Mackenzie too much hard work with all her prickles and hard edges, traits we are usually much more forgiving of in the hero. I had to constantly push myself with both of them to be true to my vision of who they were.

MBR: I loved the bits that were about Mr. Smith and Strudel. How much of the antics of your puppy would you say have found its way into the story?

SM: Well, my little Cavoodle (Cavapoo in the US, I believe) is no escape artist – he loves people too much to run away from them! But certainly I tried to inject my new found love of the quiet, wordless companionship dogs bring to a home. I’ve been really blown away by how much having Max has changed my life – I truly adore him, as anyone who follows me on Twitter can attest! – and I loved channeling that doggy love into the book.

MBR: So what’s next from Sarah Mayberry and when can readers expect to get their hands on them? (I for one cannot wait!! – as usual)

SM: You’re always very kind to me! I have another Super Romance scheduled for September. This one is called Her Favourite Rival and is an enemy to lovers type story. Audrey and Zach both work at the same retail hardware company, and they are aware that while they are equals at the moment, they are also each other’s greatest rivals for the next promotion that comes up. Unfortunately, they are also both aware of a niggling attraction that just won’t die a quiet death. An incident at the company conference throws them more fully into each other’s orbits, and from then on it’s a slippery slope for both of them from attraction to lust to something much more profound. I’m really enjoying watching these two try to swim against the tide and protect themselves.

I’m also hoping to be able to get another self published book out there before the September release – in my head, I’m thinking maybe May, which would be a full year from when I did my last self pubbed book. It will be the first book in my Fitzgerald’s Run winery series, set on a winery on the Mornington Peninsula south of Melbourne. It’s great wine country, and it also happens to be near and dear to me because it’s near where I live. I’m really looking forward to getting to know the Fitzgerald’s and the first story I will tell is Jess Fitzgerald’s. She’s a tom boy, and she’s about to realise the man of her dreams has been living under her nose for half her life…

Thanks so much for the questions and your interest. I’m so glad you enjoyed the book.

To finish off the interview, Sarah was kind enough to provide some pictures of Max, her Cavoodle. Ain’t he just the cutest? ^_^

This month’s giveaway includes 2 copies of The Other Side of Us (either e-book or paperback); open internationally. If you are requesting for the paperback version, your country has to be on the list of countries to which Book Depository provides free shipping to.