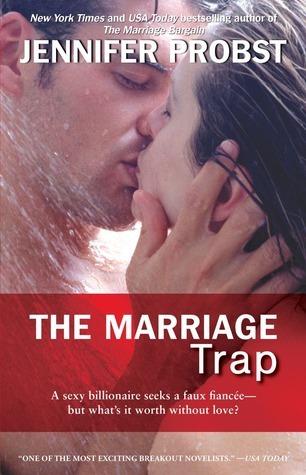 On the surface, both Maggie Ryan and Michael Conte seems to  have everything going for them. Maggie is a successful photographer of male models and someone who is in absolute control of every aspect of her life. Though the fact that sometimes she yearns for the kind of love that her best friend Alexa has found with her brother Nicholas; the kind of love that would make her belong in every sense, well, Maggie ain’t going to focus on that.

Michael is a billionaire whose success is legendary. But coming from an Italian family means familial customs do take precedence over certain modern principles and that is how Michael finds himself scrambling to come up with a woman who would pose as his wife for a short duration of time. Michael doesn’t want the hassle of emotions or any untoward demands to cloud the arrangement. And Maggie seems like the perfect choice until Michael realizes that he should have known better and that with Maggie nothing would ever be as simple as he thinks it to be.

So amidst the charade these two set out on, Maggie finds a side of herself that she thought she had suppressed far too well for it to exist after all this time. She finds herself a slave to the scorching desire that had drawn her to Michael in the first place. Michael had known from the very first encounter with Maggie that she was the kind of woman who could get under his skin and really tempt him to look beyond the aspect of just appeasing his physical needs. And that is exactly what happens when these two fight, kiss and make up in true lovers-who-can’t-get-enough-of-each-other fashion.

Though The Marriage Trap started out with the feel of characters who seemingly lead these perfect lives, its far from that. True, materialistically neither Michael nor Maggie needs much from the other. But emotionally they are both vulnerable in their own way, complementing the other in ways that neither would have thought possible. Maggie’s childhood consists of memories of being passed off from one nanny to the other. There is this gaping hole in her heart that she refuses to acknowledge though sometimes the emptiness inside of her is enough to make her question what she really wants.

Michael, though he comes from one of the most loving close-knit families, the sacrifices that he has made along the way to step up to the plate and be everything he is expected to be had changed a part of himself that he had not been able to get back. And with Maggie he finds himself willing to take the chance again to be free deep inside of his heart, to reach out and grab the happiness that he yearns for.

Maggie turns out to be what Michael needs in his life, for him to open his eyes and realize that while he had been playing the role as the head of the family and big brother, all his sisters had grown up and were more than capable of making their own choices. For a man like Michael who is used to taking charge, that is not an easy conclusion to come to. Likewise Maggie finds herself continuously challenged by the man who is her pretend husband, someone who shows her all the reasons why surrendering all of herself to him could be the best thing to happen to her ever.

Filled with spine tingling moments of the sensuous variety, The Marriage Trap is a good read that is recommended for those who love romances of this variety.

With one final plunge, Maggie shattered.
She screamed his name, and heard his hoarse shout right behind her. The world broke around her in jagged pieces, and she rode out the pleasure to the very end. When she collapsed on top of him, and his arms came around her, one word echoed over and over in her mind, her heart, her soul.
Home.
Then she closed her eyes and slept.

She moaned. He caught it and pressed a bit deeper, and Maggie opened her mouth and gave in.
He plundered and commanded in complete thrusts, reminding her of how he’d claim her body if she gave him a chance. She tried to surface and gain control of the kiss, but her mind crumbled and her body sang. He murmured her name, and her legs got shaky as she held on to him for dear life and kissed him back.

He moved. Each motion claimed her for himself, told her of his emotions and need for her to belong to him. The last of the fight eased from her body and she matched him thrust for thrust, her heels digging into his back as they climbed higher and higher. She exploded beneath him and he let himself go. The unbearable pleasure wrecked him, overtook him, and threw him over the edge. When the storm finally passed, Michael realized his life would never be the same.
And he didn’t want it to be.