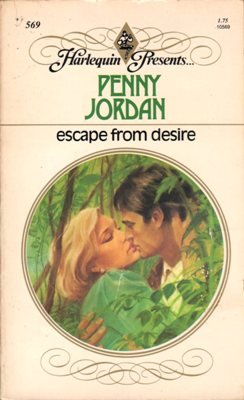 Zachary Fletcher is a man of privileged upbringing who had found his calling in serving the army. Aloof, ruthless and cynical, Zach is a man not to be crossed.

Tamara Forbes is 26 years old and engaged to marry the man who she thinks would serve her interests the best, though misgivings and doubts continue to plague her about their suitability as the date draws nearer.

Tamara and Zach’s paths cross when both end up taking a vacation in the Caribbean at the same time. Zach is recuperating while for Tamara its a vacation long overdue. When both of them are held hostage by a terrorist organisation after a hiking trip that goes awry, Tamara must put her trust in a man who is far too masculine, appealing and ruthless on her senses and for her peace of mind. By the time they make it back to civilisation, nothing remains the same.

Escape from Desire has a contemporary setting and takes place in both the Caribbean and London. Story is narrated from only Tamara’s perspective in third person.

I admit I’m someone who likes a whole lot of conflict and angst in my romances, not the type that makes me want to pull my hair out mind you, but the kind that makes you want to swoon into a puddle of dreaminess when all’s said and done.

I like revisiting the Harlequin romances for a reason. They were practically my first  source of adult romances and some of the authors such as Penny Jordan shaped my love for ruthless heroes and the women who fall for them with no way of turning back. And thats exactly what I was looking for when I picked this up to read and exactly what it delivered as well.

Tamara is naive, inexperienced and a bit of a reserved character; not surprising given the way she was brought up. Tamara appears standoffish to a lot of people and that starts chipping away the minute she encounters the enigmatic Zach who makes her instinctively take a step back because even with all her inexperience, she knows that Zach would be dangerous a man to play with.

I sometimes think that perhaps the reason why I am drawn towards heroes who can practically be called assholes is because real life tends to deliver alpha heroes of that variety. But once they fall, and boy do they fall; they are smitten to the point of obsession and displays of possessiveness & jealousy that I absolutely love. And Zach certainly was no exception to the rule. There were moments I wanted to slap him, and then there were moments I wanted to say ‘A-ha’ and sit back and watch with glee as he tried to wrestle with his feelings for Tamara. Though I’d have loved a bit more of the story to have been set in the Caribbean, this still turned out to be a captivating read that I finished in one sitting!

Recommended for fans of older Harlequin romances, fans of ruthless, mean, jealous and possessive heroes and fans of Penny Jordan. Its a testament to her impressive talent that even her earliest novels still holds appeal today.