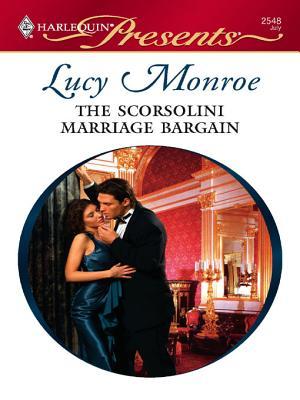 Principe Claudio Scorsolini is the crown prince of Isole dei Re and for him his duty to the country and its people comes first. Therese Scorsolini is the wife of Claudio who marries him under the terms of a marriage of convenience.

Though Therese gets married to Claudio out of love, for Claudio it is an arrangement that guarantees that he can focus on the more important issues of his country rather than undergo the emotional upheavals that are bound to follow once love enters the equation. However, Claudio is not as aloof as he would like to think he is and not at all ready to let Therese walk away from him when it becomes evident that that is exactly what she wants after three years of being together.

The Scorsolini Marriage Bargain is the 5th book in the Royal Brides series and has a contemporary setting which is told from both Claudio and Therese’s points of view in third person.

The Scorsolini Marriage Bargain deals with a very real issue that is faced by a lot of women of today. Therese is faced with the hardest decision of her life when she finds out that she might never be able to provide Claudio with a heir to the throne and for that reason alone, Therese is willing to be the better person and walk away. I could feel Therese’s conflicted emotions as though they were mine and understood her reasons for being unable to come outright and tell Claudio the reason behind her need to walk away.

I loved Claudio, one reason being, he stays true to his character throughout the story. He is committed, loyal and actually enthralled by the woman Therese is. Just how enamored he is by her is revealed slowly as the story progresses. But the angst that was a palpable part of the story was mainly due to Claudio being unaware of the shift in his emotional response to his wife and also due to the lack of proper communication between Therese and himself. Claudio remains clueless about a lot of aspects of their relationship and it was endearing to learn of all his efforts to actually show Therese how much he cares about her. Loved the way he stepped up and took care of Therese when the time called for it. If there is a reason to love Claudio, for me, that alone suffices.

I loved the fact that what Lucy actually portrays in the story, i.e. the issues that Therese and Claudio face in their marriage are the same as any other couple who might undergo such a difficult phase in their marriage; and especially if the communication barriers get broken down. There are underlying messages that Lucy conveys through the story that I received loud and clear.

For one thing assumptions is the mother of all evil where relationships are concerned. Its always healthier to ask and be certain rather than assume the best or the worst about your partner. But then again, relationships are never that simple are they.

Secondly, communication is an integral part of any relationship. If the proper channels of communication does not exist or get broken down along the way, even the smallest of things can get blown out of proportion and in the end might even be the leading cause of a breakup of a relationship. If Claudio and Therese had talked to each other and I mean really talked to each other more often, half of all the agony that both of them went through would have been avoided. But then, it wouldn’t have given me, the reader, all that angst that I absolutely reveled in throughout the story!

Thirdly, yes, there is such a thing as being far too independent. Being independent and getting things done on your own is all well and good, but then there are times that you have to lean on your partner and let him or her take care of you. If Therese had in fact let Claudio know what she was going through and let him help her along the way, they both could have discovered that there is much much more to their relationship than just a convenient arrangement on Claudio’s end.

The one thing that irked me a bit was the fact that Therese went so long without telling Claudio the actual reason behind her wanting to leave. I felt that she dragged it on for a bit too longer than necessary which actually made Claudio draw his own conclusions which certainly didn’t help matters along. And then there were areas in the story that just seemed to rehash the same stuff over and over again which became a bit tiresome to read, but overall, the story managed to captivate me enough to lose a bit of my sleep over it in order to see how Claudio and Therese would fare in the end.

Recommended for fans of Lucy Monroe and fans of angst-ridden romances. This one’s filled with just that!

She opened her eyes to look at him and saw that his head was thrown back in abandon like hers had been, his face etched with sexual pleasure. She leaned forward and bit his chest in an act so primitive, even in her advanced state of passion…it shocked her.
He was not shocked, though, but merely growled and increased the rhythm, slamming into her with pounding force with every thrust. It was so intense, she felt like she was on the verge of shattering into a million over-pleasured bits.

He gripped her tighter and she wrapped her arms around him, pressing to his body, the only sense of reality in a universe exploding from pleasure. He was silent when he climaxed, his teeth bared in a feral grimace that said more eloquently than any words could have how intensely he was feeling.