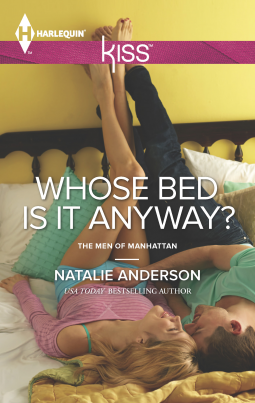 Whose Bed Is It Anyway? by Natalie Anderson tells the story of medic and rescue man James Wolfe who comes from a rich family, who works in disaster-ravaged countries, a man paying his penance for his past. The demons that haunt him are many and James refuses to stand still or rather stay in one place for far too long unless of course he is working. Work is his salvation, the only time when he feels at ease with himself. Considered a hero by many, James nevertheless shies away from the limelight, the hero status something he feels he is unworthy of.

Caitlin Moore is running from the present; the spectacle that her life had become in the past couple of weeks. When a friend offers her a place to crash, Caitlin doesn’t hesitate to take him up on his offer to seek refuge in the welcoming blanket of anonymity she’d find out of her home country. What Caitlin doesn’t bargain on is ending up sharing a room and a bed with the most devastatingly sexy man to ever stride into her life.

With an attraction that won’t quit, and with James confined to his home for the duration upon which his supervisor forces him to take a couple of days off, both James and Caitlin decide to do the sensible thing and indulge in a little holiday fling that would give them both a whole lot of fun with no expectations on either side. But the kind of searing hot attraction that James and Caitlin shares does come with a price; the price of emotional entanglements that neither factors into the equation of their holiday affair.

I loved Whose Bed Is It Anyway? from its pretty cover to the couple in the story and the very tantalizing and toe-curling variety of scorching passion in this story. Most of all I loved the hero James, his grumpy and albeit sexy as sin persona which made me salivate a bit and then some over him. His utter focus and intensity is off the charts and adds that extra layer to his character which made James a hero to covet. I loved the fact that though his only aim was to have a holiday affair, the way he is taken unawares with just how much Caitlin comes to mean to him sends him on a tailspin which served to be one of the best bits about the story. And the passion, oh dear lord the passion between Caitlin and James was so well done that I couldn’t have asked for more!

Caitlin turned out to be a beautiful character, on the inside as well as the out. With an inner core of vulnerability from growing up with a family that had been too engrossed in performing their different roles in pursuit of an acting career, Caitlin has lived a life not of the kind that she wants for herself, but one that had been required of her from her father. Scars of the emotional variety lingers in Caitlin’s heart, her wounds never having completely healed over needing an outlet due to the latest fiasco in her life. In James’s arms Caitlin finds that she is safe, treasured and wanted all at the same time, a heady combination for a woman who has never been wanted for herself in her entire life.

I loved the ending of this story which brought a smile to my face and delight to my heart. There is a playfulness to the story, the witty banter and the smouldering passion between James and Caitlin just topnotch and the right amount in my opinion.

Recommended for fans of Harlequin romances and fans of Natalie Anderson. I am definitely going to be sampling more of Natalie’s work in the time to come. And the good news? There are two more books lined up in this series if I am not mistaken. Hoping for just as delicious stories for the other two brothers as this one!

Given her gasp, her mouth was already parted. So was his. Hot, hungry, he lashed out with his tongue, claiming her with no hesitation.

It was all kiss. And not gentle. Not tender. Just raw, rampant hunger.

His fingers began to trail back up her leg, this time sliding under the tee. As he encountered the bare skin of her buttocks he groaned, his body flexing in automatic response—a powerful, passionate thrust that made her gasp even as he plundered her mouth with his tongue. For a long moment they lay locked—straining together, his tongue thrust deep, his blind cock seeking to drive deeper still, while she bore down on him, open and wet and willing.

She fell back on the bed. He fell with her, his lips connecting with hers. She closed her eyes as she sa- voured the glorious weight of him. His tongue stroked deeper this time, seeking knowledge. She let him find it—opening up to let him explore completely. She lifted her hands, exploring the breadth of his back, feeling the strength of his lean muscles. Oh, yeah, the guy was fit. Taut. Hot.

Slowly she looked from his face, to his shoulders and then down to where muscles tapered to slim hips and the trousers slung low. The front of his combats was taut. His hands went to his waistband, undoing the button with a teasingly slow hand. Caitlin tensed. He was getting to the good bit. He unfastened the next button, then rolled down the waistband—ex- posing skin.
Oh my.
Caitlin was entranced.

‘Show me how much,’ she asked. ‘Show me.’
This time he didn’t stop. This time his breathing roughened along with his movements. This time he swore pithy and crude as he told her again how good she felt. How he couldn’t stop. How he wanted more. And he took more. Pushed for her absolute acceptance of him. Driving into her over and over and over.

‘I want you,’ she said.
James swore, grabbing her wrist and striding out of the elevator the second the doors slid open. He un- locked the condo as quickly as he could, pulling her inside and slamming the door. He hauled her close and kissed her like the sex-starved animal he was. Furious satisfaction roared through him as she slid her arms around him and clung, opening instantly for him.