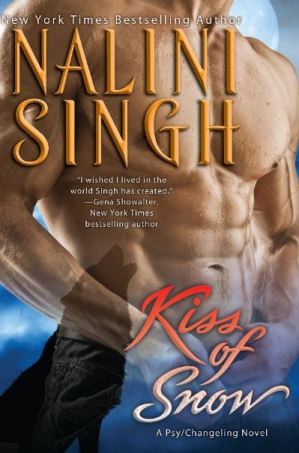 So, you ask me, how does it feel to have reached and read Hawke’s story, the 10th book in the wondrous Psy-Changeling series; the main reason for me starting on this journey being to actually read Hawke and Sienna’s story which was pretty much sensationalized by the whole Goodreads community. Well, perhaps I might be a victim of my own expectations and all the sensationalism because I must say I was just a trifle bit disappointed with the story not because it wasn’t as exciting as the Psy-Changeling books always are, but rather because I felt that Hawke and Sienna was somehow shortchanged because of the gravity of everything else that was happening in the story.

Hawke is the Alpha of SnowDancer wolf changeling pack and is a man determined in the face of his fate. A fate that he believes wouldn’t ever ease the deep aching loneliness in his soul left by the death of the woman who would have been his mate for life. No matter how much Sienna Lauren might tempt him and call out to his inner wolf to come out and take a bite, consequences be damned, Hawke calls on the reserves of his icy and legendary control to stay strong in the face of temptation.

Two months after Indigo and Drew’s story takes place, the politics that governs the world inhabited by Psy, Changelings and humans keep changing, and not for the better in certain aspects. The Changelings call on all their reserves and up their vigilance when it comes to Psy because they all know that with the Psy council split into halves, its only a matter of time that war breaks out with the Changelings being the main focus of the war that Psy will wage in order to attain a world inhabited by pure Psy.

Sienna has known from the day that she and her family defected from the PsyNet and sought the protection of the SnowDancer Alpha that there would be no other man for her. Hawke might see her as a child but Sienna’s childhood has left her with many a scar and experienced so much more than even an adult might be subjected to during their entire lifetime. Sienna is an X-Psy meant for one purpose alone; destruction. With the ferocity of the power that Sienna always juggles in her hands, Sienna knows that her emotional well being is a key factor in controlling and keeping the destruction at bay. What Sienna doesn’t realize is that for an X-Psy, there does come a point of no return when there would be nothing left but to give in to the deadliness that she lives with every second of each day.

There are so many elements to the Psy-Changeling stories that makes them what they are; an entertaining and one hell of a read. Juggling all these aspects of the story together with Hawke and Sienna, who in their own rights are just as complex and multi-faceted must have been something and once again made for a great read in my opinion. However, both Hawke and Sienna have been waiting for their story for 9 whole books; Sienna had to grow up age wise enough for Hawke to not feel like he is the worst kind of pervert. On top of that there’s the issue of Hawke’s belief that he wouldn’t be ever able to give Sienna everything that she deserves and that would be the whole of him with nothing held back.

At first, I loved the way Hawke’s resistance came tumbling down, bit by bit when it became clear to him that his wolf wasn’t backing down on this one. The many an exasperating situation Hawke finds himself in because of Sienna and her antics to live her life as she pleased ends up being fraught with so much tension one minute and the next so tender and wistful that one cannot help but feel all the longing held deep in check on both sides. And I absolutely adored how Sienna seemed to be able to match Hawke in intelligence and wit, giving her all those qualities that makes her the perfect life partner for Hawke apart from the almost visceral need that burns bright between them.

However, in my opinion, there was too much holding back on Hawke’s part when it came to the final combustive culmination on Hawke and Sienna’s relationship. There were so many interruptions into the interludes that took place between Sienna and Hawke and I know that it built up the frustration not just between Hawke and Sienna but the readers as well. I expected fireworks, explosions and Hawke to live up to his legendary prowess as the Alpha of the pack and give me some seriously panty-melting variety of combustive scenes of passion. But what I got instead was tenderness and love in spades, which is not a bad thing but I would say it does take away one essential aspect of Hawke from him; his wildness that is held deep in check because he is the one that holds his Pack together. I wanted him to be able to let go and lose that legendary control of his that had kept him from reaching out to Sienna and taking her up against a wall or any flat surface they  could get to because lets face it, Changelings are by nature sensual creatures. But perhaps, Nalini toned the whole thing down for Sienna because her “fragility” when it comes to her power and the darkness that consumes her is one that needed to be handled with utmost care for the story to have been what it was.

More than Hawke and Sienna’s courtship, I was more revered actually by the secondary romance that unfurled between Sienna’s uncle Walker and the SnowDancer healer Lara. Walker who has never let himself accept the fact that when it comes to Lara his feelings run deep and in a direction that it has never steered before made for riveting reading. Lara is a gentle soul with a spine of steel to back it up. She is the healer who gives her heart and soul into caring for people when they are in need of it the most. Not much of a dominant, Lara knows in her heart that taking a step back from Walker who doesn’t seem to want to pursue what is between them would be the best thing for her. But Walker surprises her with those little things that he does in showing just how much in fact that he does care and in the end I loved how the legendary cool of Walker broke down under the gentle playfulness and love that Lara gives him in spades. I think sometimes Lara and Walker’s story acted as a balm to the reader’s soul to take a step back from all the intensity this novel was in every other aspect.

I’m almost sad that I now have only just two books to read in the series and would have to wait with the rest of the fans of this legendary series for the next book that is scheduled to come out in June of 2014. That is going to be a long wait I suppose if I do manage to get the time to squeeze in the other two books before then. I’m almost jealous of those who haven’t yet discovered the wonderfulness of this series, those who are yet going to find out just how talented Nalini is in keeping the reader engrossed from page one till the end. As always I must say, Nalini is a talent not to be missed in a genre that already has so many great authors. It is a tough job to stand out and do that exceptionally well with each book she publishes. And to the readers who are just starting out on the series or a halfway tempted to skip to Hawke’s story, I tell you just as Nalini told me, don’t. It’d certainly be worth the wait to see how the world and the lives of everyone shapes up in the rest of the stories.

Recommended for fans of the series and fans of Hawke! You just might end up with lesser misgivings that I did after reading because I seem to be in the minority with those who think that Hawke’s story lacked that something which would have made it a stupendous read. But even then, this as any novel in the series is awesomely well done and I cannot recommend this book and the entire series highly enough!

It took every ounce of will he had to drop her arm, to not accept the unintended invitation and take them both to the floor in a tangle of skin and heat. But he couldn’t stop himself from running the knuckles of one hand down her throat as he stepped away, his gut tight, his body so damn hard he might as well have been made of steel. He moved until he was in prime position to watch her, and then he waited. She did nothing for a long, still moment, and he thought she would deny him this.
But then Sienna began to move.
And his wolf stopped pacing.

“Did you ever play?” Hawke’s voice so rough, his body so muscular and overwhelming.
She had never felt more feminine, never felt more like a sexual creature. “No.”
A pause. “Sienna—”
“No,” she said. “No more questions. Not tonight.” She wanted to dance with him, be a woman in the arms of a man who made every part of her awaken in a hunger she’d never expected to feel and who, for this magical moment, was hers.
His jaw, heavy with stubble, rubbed against her temple again as he shifted his hold to press her closer. Then, as the music played, as the night grew softer and quieter, they danced.

“It was easier to believe that my shot at mating died with Rissa than to risk that kind of pain again.” Thrusting his hand into her hair, he shook his head. “Except I never had a prayer when it came to you. You’re in my every breath and every thought, intertwined so deep inside me that love’s not a strong enough word—you have my devotion, your name branded on my soul, my wolf yours to command. A hundred years? It’ll never be enough. I want eternity.”