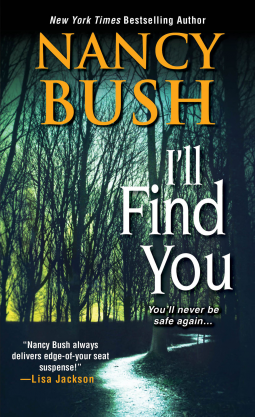 I’ll Find You by Nancy Bush is my very first novel by the author. Combining a little bit of romance with a whole lot of suspense, the one thing that had me going was the way Nancy writes. There is that quality to her writing that draws in the reader and compels one to keep on reading. And that held true for me for the first half of the book while the latter half turned out to be a bit draggy and a trifle bit confusing for me to enjoy it as much as I did for the first half of the story.

Callie Cantrell returns to Martinique as a step towards moving on with her life after the death of her son and husband in a horrible accident from which she had woken up to find that her beloved son was no more. Deciding on a date to return back to the chaos that she has to sort out once she heads back to normal life is made doubly harder by the little boy she befriends during the trip, the boy proving to be a valuable part of the journey Callie takes towards finding herself again.

West Laughlin is on a mission. The black sheep of the Laughlin family is summoned to hunt down its apparent heir and West is determined that he would pull no punches where this particular mission is concerned. When he comes down on Callie, West is surprised by the thread of desire that courses through him even when the very thought of all that she has done sends revulsion running up and down his frame.

When Callie encounters West under less than favorable circumstances, Callie is determined to do whatever it takes to protect the boy that West is after. Having had no desire to move on with the opposite sex after the shame of her short-lived marriage, Callie is taken aback by the frissons of awakening that pulls her out of the state of mere existence that she has been living through for the past year. And as Callie and West join forces to determine the exact truth behind so many half truths and hidden agendas, so do the unknown faces behind the curtain move towards the final showdown from which no one might make it out safe.

As I mentioned earlier, I’ll Find You starts off on a fascinating thread. A cult, a mad man hellbent on getting what he considers rightfully his and the unknown force behind an equally evil and nefarious plot that might unravel the whole thing before things reach their ultimate conclusion seemed like just the ingredients for an explosive story. Though I liked Nancy’s writing well enough, towards the end, the story didn’t wow me as much as I had initially thought it would.

Callie and West, both were characters that I liked well enough at the beginning. But somehow, I think, because the focus of the story was more on the villain rather than the main protagonists towards the latter part of the book, the shine to their characters tended to fade away for me. Nevertheless I rooted for them until the very end.

I think the too many threads in the suspense plot turned out a tad confusing in the end, but then again it did deliver some surprising twists to the story that had been hard to predict at first.

Recommended for those who love their romantic suspense low on the romance and high on the suspense factor.

Final Verdict: Delivered a read with some surprising twists towards the end.