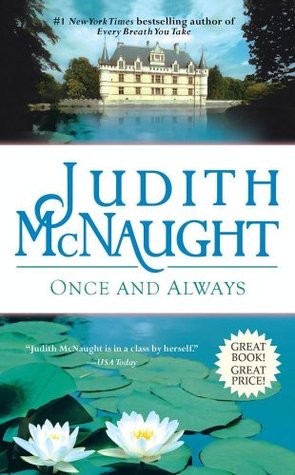 Judith McNaught is one of the most revered authors in the romance genre, and with good reason. Her books have turned many a romantic soul into romance readers, giving them all something to dream, sigh and moon over. I have read all the published works by Judith McNaught to-date and loved almost each and every single one of them. I have revisited the books that I consider my favorites many a time. Most of those re-reads took place before I established my blog in 2009. So here goes, a review for Once and Always, a tale that for me, stands the irrevocable test of time itself.

Jason Fielding, the Marquess of Wakefield is a man who hides a wealth of pain beneath the formidable exterior of his. Life has taught him time and yet again that love and happiness is not meant for the likes of himself. His failure of a marriage and the consequences left behind in the wake of the disaster that particular venture had proven to be makes Jason a man wary at best of getting entangled with the opposite sex in a way that would lead to anything permanent. Most of all, Jason considers his heart closed off forever. His less than stellar childhood had also taught him that valuable lesson. That is until Victoria Elizabeth Seaton makes her way into his life and changes it forever.

18 year old Victoria is forced to leave the home that she has known all her life that is in America and sail to England where her maternal relatives await her and her sister’s arrival. From the moment Victoria and Jason meet, sparks fly. Victoria being the kind of person who is concerned about the welfare of those around her clashes at every turn with someone like Jason who has closed himself off from caring about what goes on in other people’s lives. Moments of hilarity and mirth fill this novel, at least during the beginning of the “courtship” stage where Jason hardly knows what to do with Victoria and Victoria in turn wants nothing more to do with the likes of him.

Moments of truce disappear into thin air more often than not, especially with Jason’s plans to wed her off so that the Duke of Atherton would stop trying to push him to take her as his wife. Victoria is equally determined to stay unwed, until her beau from America returns for her. But alas, as fate would have it, with more than a little helping hand given by the Duke, Victoria finds herself wedded to an exasperatingly beautiful man, who makes her senses go alive with the merest of touches. Each kiss and caress exchanged convinces Victoria of the fact that when it comes to her and Jason, falling in love is a foregone conclusion. But their future and happiness depends on how soon Victoria can make Jason see that when it comes to her, he would always get nothing but the purest of love.

Once and Always is a wonderful novel to immerse yourself in, if you like romances that deliver a ton of angst that can make you tie yourself up in knots, even when you know that the inevitable conclusion would be a happy one. Jason is a hero whose commanding presence alone makes a woman go gaga over him. Taming someone like Jason is a task for someone who is as strong as Victoria, someone who wouldn’t back down in the face of all the rejections and walls that Jason puts up, all because he can’t bring himself to be that vulnerable towards someone, ever again. But tame him Victoria does, and the result of course is a man whom you would indeed fall head over heels in love with.

This is exactly why Judith McNaught is an author that remains unrivaled in her contribution to the world of romance. Tempestuous, angst ridden and filled with so much love and passion that you would feel like dying if you didn’t read it to its ultimate and very satisfying conclusion, Once and Always managed to keep me spellbound, and God knows how many times I have already re-read this particular book already.

Final Verdict: Jason and Victoria’s love is bold and vivacious; it is all encompassing. Not to be missed!

“Have I made another social blunder—like failing to knock?” he inquired in a low, amused voice, his lips offensively close to her cheek as she took her seat. “Is it not the custom in America for a gentleman to seat a lady?”
Victoria jerked her head away. “Are you seating me, or trying to eat my ear?”
His lips twitched. “I may do that,” he replied, “if the new cook provides us with a poor meal.”

Charles pushed her out the door under the guise of escorting her to her carriage, and Victoria halted and swung around on the stairway. Like a beautiful, outraged goddess she stood trembling with wrath, staring down at Jason. “Am I to understand,” she enunciated furiously, “that the engagement you said was ‘off’ was our engagement?”
Jason’s only answer was a tightening of his jaw, but his silence was a tacit admission, and she glared at him with blue sparks shooting from her eyes, heedless of the servants who were staring at her in paralyzed horror. “How dare you!” she hissed. “How dare you let anyone think I would consider marrying you. I wouldn’t marry you if you were—”
“I don’t recall asking you to marry me,” Jason interrupted sarcastically. “However, it’s reassuring to know that if I ever took leave of my senses and did ask you, you’d have the consideration to turn me down.”

Victoria saw something primitive and terrifying flare in his eyes as his hands tightened on her arms. She jerked back, a scream rising in her throat, but his lips covered hers, stifling her voice with a demanding insistence that stunned her into immobility. Like an alarmed rabbit captured in a painless trap, she struggled until she felt his hands stroke soothingly up and down her spine and shoulders, while his lips moved on hers with inflaming expertise.

“William Rogers,” Charles shot back in a challenging voice, “and he’s tall, conservative, mature, intelligent, and handsome. He’s also heir to one of the finest estates in England. I think he would do very well for Victoria.”
“No.”
“No?” Charles burst out. “Why not?”
“I don’t like the way Rogers sits a horse.”
“You don’t like—” Charles bit out in angry disbelief; then he glanced at Jason’s implacable face and sighed. “Very well. The last name on my list is Lord Terrance. He sits a horse extremely well, in addition to being an excellent chap. He is also tall, handsome, intelligent, and wealthy. Now,” he finished triumphantly, “what fault can you find with him?”
Jason’s jaw tightened ominously. “I don’t like, him.”
“You aren’t going to marry him!” Charles shot back, his voice rising.
Jason lurched forward in his chair and slammed his hand on his desk. “I said I don’t like him,” he said through clenched teeth. “And that’s the end of it.”

But in the mounting turmoil of their kiss and unaware of the hardening pressure against her stomach, Victoria let her fingers slide into the soft hair at his nape while her body automatically fitted itself to his—and suddenly everything changed. Jason’s arms closed around her with stunning force, his mouth opening on hers with fierce hunger. He parted her lips, teasing her with his tongue until he coaxed her to touch her own tongue to his lips, and when she did, he gasped, pulling her even closer, his body taut with fiery need.
When he finally lifted his head, he stared down at her with an odd expression of bemused self-mockery on his ruggedly chiseled features. “I should have given you diamonds and sapphires the other night, instead of pearls,” he commented. “But don’t kiss me like this again until after we’re married.”

“You have a very peculiar idea of what being a wife means,” he mocked savagely. “Now, get out of here.”
“Damn you!” Victoria blazed. “I don’t know how to be a wife, can’t you see that? I know how to cook and sew and look after a husband, but you don’t need me for that, because you have other people to take care of you. And I’ll tell you something else, Lord Fielding,” she continued, working herself into a fine rage, “I may not be a very good wife, but you’re an impossible husband! When I offer to play chess with you, you get angry. When I try to seduce you, you get nasty—”
She saw Jason’s head jerk up, but she was so angry she didn’t pay any heed to the stunned expression on his face. “And when I bring you a gift, you go off to London to see your mistress!”
“Tory,” he said achingly, “come here.”

Beneath her she could feel the pulsing of his rigid shaft, the fiery touch of his heated skin, the violent hammering of his heart against her breasts. But instead of taking her, as she expected, he gazed at her with desire raging in his eyes and humbly said the words he had tried to force her to say last night. “I want you,” he whispered. As if he didn’t think he had humbled himself enough, he added, “Please, darling.”
Feeling as if her heart would break with the love bursting in it, Victoria answered him with a melting kiss. It was answer enough.