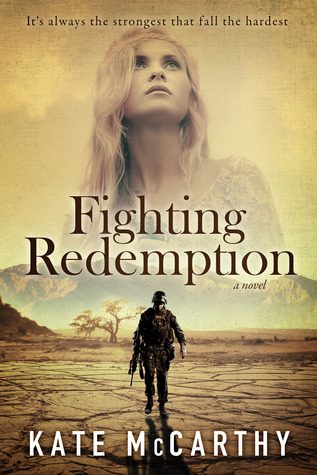 Fighting Redemption by Kate McCarthy is a book that came to my notice because it was featured quite prominently in the list of Goodreads Reader Choice award for 2014. I have this tendency to keep delaying reading certain books; God knows why. Finally, this February, I took the plunge and started reading, and I have to say even though I wasn’t as wowed like most readers who have voted for this book have proclaimed to be, I could definitely see where the appeal lies.

Fighting Redemption begins in a way that makes the reader believes that the ultimate worst has happened. But trust me, that is so not the case. From the moment Ryan Kendall returns home, having spent six years in the Australian Army, one look is all it takes for him to know deep in his heart that he needs Finlay Tanner like the very air he breathes.

Fin and Ryan’s story is one that goes way back into their entwined childhood. Ryan getting the short end of the stick when it had come to his childhood. Ryan had always held the dream of getting away from everything and forging his own path. But it comes at the cost of leaving Fin behind, the only woman who has ever mattered and who ever will.

While I could get the whole pain of his childhood that made Ryan the way he is, determined to leave it all behind even when he knew he would never be able to let go of Fin, I always have a problem with heroes and heroines who are willing to go the whole nine yards and beyond with the self sacrificial behavior. I mean, don’t get me wrong; I do get where most of them come from. But putting both their selves in pain that could have been avoided otherwise, and in the meantime ending up with the wrong people because of that and regretting it for a lifetime, those are things that makes me wonder whether the two of them even deserves to be together.

The pain of the separation and the angst of it all might add to the story. But just like certain tropes like heroines getting pregnant and not letting the hero know gets on some readers’ nerves, I guess this particular tidbit in romance novels raises my ire.

While I was not all that moved by how Ryan continued to oscillate between letting Fin be and wanting her for himself, I could certainly see why the story is highly readable in all aspects of it. My problem lay with how I felt watching Fin just give and give until she pretty much had nothing left to give, while Ryan continued to play yo-yo with her feelings.

In my view, Ryan seemed to love the army more – which was perhaps the reason why I had such a hard time loving him like most readers did. Fin was courageous, the kind of woman we call as strong, because they stand up for themselves even when the going is tough and do what needs to be done. For me, Fin was the reason I kept going. Fin in the end made the story!

Recommended for those who love strong heroines and military heroes.

Final Verdict: A soldier’s fight with forgiveness for himself; tugs at the heart!

“Maybe you don’t, but I don’t get it. He was violent towards you.”
She huffed, her exasperation clear. “He wasn’t. We had an argument. You punched him.”
Ryan nodded, drawing in a deep breath of satisfaction. “I did, and I won’t apologise. Not for that, because I’d do it again.”
She stood in front of the armchair Jake vacated earlier that evening and sank into it. “We’re just going around in circles,” she muttered wearily.
He looked at her, drowning in the desolate green depths of her eyes. “I want you, Fin,” he finally admitted. “So damn much I can’t sleep from it. I lie in bed at night and I dream of my lips on yours, my mouth tasting every inch you. I want to fuck you until I go blind from it and even then I don’t think it would ever be enough.”

“Are you happy now?” she hissed as she grabbed a pair of jeans from the shelves.
His eyes on her ass, he muttered, “What?”
She threw the jeans at him and he caught them when they hit him square in the chest. “This. Us. Yes, okay? I want you. Is that what you want to hear? That I dream of you too?” she choked out. “Your hands on me, inside of me, and I ache too.”
Ryan took a step towards her.
“Don’t.” She snatched the jeans out of his hands and tugged them on.
“I’m sorry,” he murmured.
Fin turned, rummaging for a top. She pulled one off a hanger and tugged it on furiously. “You’re sorry. I’m sorry. Everybody’s sorry. Well it’s just one sad, fucking sorry situation, isn’t it?”

“Don’t say his name. Tonight you’re mine. If Ian wanted you as much as he fucking claims he does, he’d be here right now where I am, dragging out every last minute he could get with you.” Ryan’s hands slid down the small of her back and underneath the elastic of her panties until his hands gripped her ass. “He’d be the one touching you.” He leaned in and bit her earlobe sharply before licking it better and she shivered. “He’d be the one tasting you,” he breathed in her ear. “But he’s not here. I am. I’m the one touching you. I’m the one holding you, because you’ve never been his.”

She shook her head and wrapped her legs around his hips, squeezing him. “Fuck me, Ryan.”
Ryan drew back and looking into her eyes, slammed in again. “Nothing, Fin …” he breathed.
“Nothing?”
“Nothing…” he slammed in again “…has ever felt more beautiful than you do right now.”
Christ. He didn’t just love her, he fucking adored her. He’d give his life for her if he had to.

“I forced you to have sex with me,” she whispered.
He froze.
Straightening his back, he looked down at her, his eyes searching her face. “Is that what you think?”
Fin nodded mutely.
“That’s so far from the truth I can’t believe you’d even think it. I have a thick skin, baby,” he told her, his wide shoulders crowding her back against the cool tiles, “but you’re under it. You’re buried in there so deep it’s like I was born with you in my soul.” His eyes slowly ignited as he slid soapy hands over her hips. “When I’m near you I’m consumed by you—your smile, your eyes, your heart. Even though we’ve never been together, you’ve always been mine, and even if I never get to keep you, you’ll still be mine.”

He pulled away. “Turn around.”
She turned blindly, giving him her back.
“Brace your hands against the wall and lean forward.”
“Ryan?”
“You can trust me, Fin.”
Fin nodded. She’d never trusted anyone more than she did Ryan. When she did as he asked, he grabbed her hips, yanking her back further. One hand fell away, and then he was there and pushing inside her. A moan broke free and she didn’t even know if it was him or her.
With both hands back on her hips, he slid all the way in. “Oh fuck,” he breathed. “My beautiful Fin.”

Ducking his head, Ryan took her lips hard, his tongue thrusting inside her mouth and tasting her wildly. Tearing away, he looked at her for a long moment, his chest rising and falling heavily against her own. “I want to say I love you too, but it doesn’t seem enough.”
With a shaky hand, she brushed away the silky strands of hair that caressed his forehead. “Say it anyway,” she whispered.
“I love you, Fin. I’ve always loved you. Right from the moment you walked up those steps at school, you tripped your way right into my heart. I won’t ever stop. I’ll love you longer than the stars that live in the sky.”

“If you keep looking at me like that, we won’t be going anywhere except inside where I can fuck you hard enough to block out the entire world.”
Fin’s mouth went dry. The soft streetlight cast Ryan half in shadow, adding a dark intensity to the hard planes of his face. His wide shoulders and the tanned muscles roping his arms and chest were illuminated flawlessly. Her eyes fell to the waistband of his jeans, and her hands, now on his hips, eased the hem up slightly on his fitted shirt, baring a small sliver of skin. She skimmed her hand across his warm, taut stomach, letting her hand slide around his torso and glide up and over his back.
Fin looked up at him from beneath her lashes as Ryan shuddered beneath her touch. “I want you.”
He exhaled audibly, dipping his head and sweeping her lips up in his, their pressure hard and wild as her heart thumped madly. She dug her fingers into his bare skin and he groaned. “I want you too. All the damn time.”

Oh God, what this man made her feel. Even as her legs trembled, aching from their straddled position over his hips, Fin felt she could keep moving like that forever.
Ryan scraped his teeth over her skin, biting the tender skin before pulling free. Both hands now on her hips, he slammed inside her, her body jolting with the force as pleasure shattered her apart.
“Fuck,” she heard him mutter as her body clenched around him. Her eyes fluttered open to find him watching her intently. His lips were parted, his cheeks flushed, and when he came, all his muscles pulled tight as he ground his body inside her, growling her name wildly.