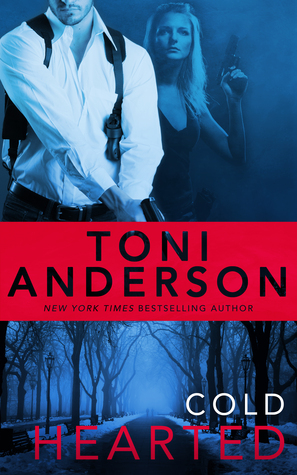 Toni Anderson’s Cold Justice series has been an amazing ride so far. With each book, Toni manages to bring to the table a diverse cast of characters and stories that tugs at your heartstrings, while at the same time they deliver on themes that makes you sit up and take notice. Cold Hearted, the sixth book in the series checks in all those boxes and then some.

Detective Erin Mairead Donovan is persona non grata when it comes to Forbes Pines, a highbrow college town in St. Lawrence County. Erin earned her way into the town’s list of people to be hated with a vengeance when she had been pivotal in the conviction of one of the star students in the college for a string of rapes that had rocked the town.

When a double homicide turns up one victim with eerily similar methods of restraint used by the serial rapist, it shakes Erin to the core and makes her question everything that had been done during the prior investigation. Things get more heated when FBI Agent Darsh Singh turns up to assist in the investigation, who just happens to be the one explosive “mistake” in Erin’s life that had rocked her to the very soul.

With a killer on the loose, someone who is cunning enough to know the ins and outs of the justice system and able to manipulate everything to suite his needs, it is a ticking time bomb that Darsh and Erin have to diffuse, on top of their wild attraction for one another that just seems to burn hotter and fiercer the more they try to ignore the fact.

When Cold Hearted ended up in my inbox, it had come at an opportune time. As I kept turning the pages deep into the night, I realized that Toni had managed to defeat all my fears that had come to light when I had just stopped finding much joy in the books that I had picked up in the last couple of months. It had reached the point where I had been afraid that maybe the romance genre as a whole had ceased to be exciting for me. But Toni made me sit up and recall why I love reading romances, especially romantic suspense in the first place! So from the bottom of my heart Toni, thank you!

People might judge those who read romances all the time, but that does not change the fact that some of the stories that are crafted under the genre are exceptionally well written and well researched and teaches you a thing or two before you are done. Toni’s stories have a way of doing that for me – without fail. Which is why I will always keep coming back for more; because Toni’s stories work in ways most books fail.

I loved Erin and Darsh. Erin is all modern woman. Strong, resilient and stubborn to a fault – it takes a strong man to take on a woman like her. I fell head over heels in love with Erin the minute I came across the following bit in the book. At that exact moment I thought to myself, Erin is my kind of girl!

It might have been a sin in the eyes of the church, but the part of her that wanted to feel ashamed was quickly buried under a mountain of resilience and hard-won independence.
It was none of his damn business.

Darsh makes for the perfect match in that regard. He has his demons to fight. Neither is he perfect in what he is or does. He is charming, hot as a slice of sinfully good chocolate cake that you just want to consume a whole and wonderfully big hearted. He has his own demons to fight, but then who doesn’t? Neither Erin nor Darsh are picture perfect, nor are they meant to be. They work as a whole because they are human – and that is what makes these stories the emotionally well crafted tales they are.

Darsh’s past makes him susceptible in just the same way as you and I would be when it comes to emotional ground. But he was more ready than Erin to take that leap into the unknown, Erin who was more of a mess than she would let herself acknowledge. I’m glad that she found someone like Darsh who was willing to go that extra mile to believe in both of them, until she caught up, or rather was willing to catch up and be with him.

As I mentioned earlier, Toni’s stories are great reads not just because of the romance and suspense element and the likable characters that they deliver. They are great reads because they are books that tickles your brain cells and makes you think harder and longer about aspects of society that you might not otherwise.

We all talk about the justice system, how it most of the time fails society at large and how it’s just a matter of how good your lawyer is in spinning a good tale, which seems to be all that matters in the end. Toni was brilliant in the way she laid the story out. In this aspect, the way the villain is crafted was the masterpiece in my opinion.

Though he was the monster no woman should ever cross, the basis of his monstrosity is one that at least I can agree with. How screwed up society can be, how the system can fail you over and over again – these are things that happens in front of us all the time, things that we don’t take much notice of because it is not happening to us or someone we love.

Toni’s stories are great because they deliver the subtle and the not so subtle messages of failures in law enforcement, the justice system – the system as a whole and how people can actually make a difference, if they are willing to wade into the muck and try. For that alone, I would pick anything that Toni sees fit to write.

Final Verdict: Here is a genius who gets each book down to pat every single time! Compels readers to keep the pages turning deep into the night, when we all should know better.

Erin smiled and Darsh stared like a fool. He kept forgetting how incredibly pretty she was when she wasn’t spitting mad at him.
“I’m sure she’d appreciate that.” She stood, leaning a hip against the table, crossing her arms, revealing cleavage, badge and sidearm. His skin got tight. His neck hot. “She also tends to be swayed by pretty faces.”
He stilled. Raised his chin. “You think I have a pretty face?”
“No.” Erin gave him a smirk that told him she knew exactly what he was thinking before she gathered up her notes. “But she does.” With that she left the room with an arrogant swagger to her hips.

He wrenched at the sleeves of her shirt until it fell to the floor. She reached behind her for the clasp on her bra and he dragged it from her body and tossed it to the floor. And there she was, half-naked in his arms.
“We’re taking this very, very slowly.”
“No.” She sank her fingers into his hair and kissed him open-mouthed, before breaking away. “I don’t want slow. I want it hard and fast against the wall. Right.” She nipped his lower lip. “Now.”

He wanted to hold back. Wanted to treat her with reverence, but he was beyond slowing down. Her gaze met his. Urged him on. “Do it.”
Part of him wanted to curse her for reducing him to a rutting animal, but the expression on her face wasn’t sordid or dirty. It was lust and want and desire.
He held her steady and rammed into her, over and over, feeling her arousal build again, hearing her cries of passion as she crashed over the edge and his climax exploded and blew out his brains even as she pulsed and spasmed around him.

“You’re so beautiful,” she told him.
“That’s my line.” He rolled them so she was on top. Ran his hands down her sides and then up over her breasts, cupping their soft weight in his palms. She loved how he made her feel, like she really was beautiful. Slowly he started moving beneath her, small thrusts driving her insane with the need to take more. Stretching her, filling her, making her toes curl with pleasure but not enough to push her over the edge. The callouses on his fingers grazed her skin in a way that made her back arch. So good. She’d forgotten. She’d forgotten the long, winding path that could lead to the perfect climax.

“I can’t wait much longer,” he gritted out.
“What are you waiting for?” she gasped. It felt so good. So good.
His eyes heated. “You.”
He hit the spot that made her cry out again in panicked pleasure. Suddenly she was flooded by sensation, each nerve bursting like a firework through her body as white light exploded behind her eyes. His shout of completion chased her as she catapulted through some alternative dimension before landing right back in his arms.

He didn’t stop moving, just walked into the shower and grabbed the woman who’d filled his head with lust from the moment they’d met. He pressed her against the cool glass.
After a moment’s hesitation she kissed him, open-mouthed and sensual. Then she ran soap-slick hands over his back and shoulders. His body couldn’t get enough of her. His brain was struggling too. He lifted her up and her legs went around him and he slid home.