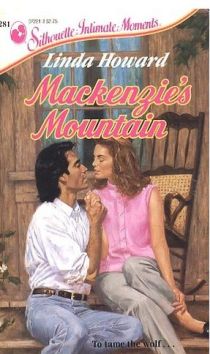 This is the first book of The MacKenzies series and the only book of the series that I liked. Though I didn’t try the 3rd and 4th book of the series, I did start to read the 2nd book in the series, i.e. Joe MacKenzie’s story & it never did make the impact this story made on me for the very first time which is why I ended up re-reading this story all over again after reading through a discussion thread on Amazon’s romance discussion forum.

Wolf MacKenzie is a half breed, half Comanche and half Indian. For that alone he had led a pretty solitary life in the small town Ruth where he and his son Joe resided. And add to that a rape charge for which he did time and later was found not guilty of when the real culprit was found, Wolf & Joe had been paying the price of that unjustness of it all ever since.

Mary moves to the small town as a teacher, and finds out to her dismay that Joe who was the highest scorer in all the classes had dropped out of school. Mary vows to right the matter and in fact makes the trip to where the twosome lived up on the MacKenzie mountain. On the way Mary’s car breaks down and comes face to face with larger than life Wolf MacKenzie who manages to kiss her senseless and sets her senses whirling like never before.

Wolf doesn’t need the added complication of Mary in his life. However, he can’t help but feel a need for her deep within him that cannot be ignored. Meanwhile, Mary starts giving Joe private lessons so that he could catch up with the other students and fulfill his dream of being a fighter jet pilot, a dream which Mary helps him fulfill within no time.

However, forces within the small town who do not want Wolf and Joe to become a part of the town work towards framing Wolf for rape again, a fact Mary is convinced of, which leave the women of the small town agitated and scared out of their wits.

This book is heartwarming in so many ways. The way that Mary sides with the black sheep in town and makes the townsfolk regret the way they had snubbed them for so long, the undeniable passion between Mary and Wolf which makes the book a continuous sensual delight and how in the end Mary draws out the rapist with her wit and courage and of course the lovely ending of the book which makes me want to read the book once more.

The person who suggested this book as her absolute favorite romance book of all time has surely hit a winner with this one. This is one book that any romance reader who loves contemporary romance should read!