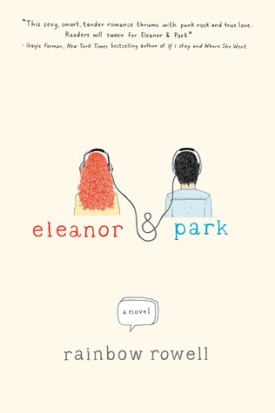 Rainbow Rowell is an author who is completely in a league of her own in the way she makes her characters and stories come alive with so much emotion that it practically hurts you – but in a good way. Eleanor and Park is no exception to this rule, and though the ending was a bit hasty for my tastes after the grueling bouts of angst that Rowell puts readers through, this is a story that has stayed with me long after I was done with it.

Eleanor is the new girl, who with a style that does not fit in with the rest, makes Park want to get away from it all. But even then, with all his misgivings about her, he does slide over in the bus and gives Eleanor the seat next to him to sit. Thus Eleanor and Park finds themselves going through the motions of friendship which grows into something tender, stronger and wilder by the turn of each page, all right before your eyes. Their love unfurls in a setting that is as simple and ordinary as they come. At the back of a school bus that ferries them back and forth day in and day out.

While Park has a relatively good life, Eleanor’s is one that is filled with horrors of the kind we would all rather not even think about. The fact that her mother does try to protect her does not mean much in the face of what is as inevitable as night turning to day, and one cannot help but be appalled, scared and wanting to grab Eleanor right out of the pages and provide her with a safe haven.

Like most readers I believe, I loved the bits where Park started to communicate with Eleanor in subtle ways at first, which developed into something that was so wonderful that it made my heart ache. I could not put this down from the minute I started reading, and I would not have had it any other way. Eleanor and Park is a story that is meant to be read in one sitting, a story that is meant to be devoured, if nothing else, just to feel the thousand and one emotions that courses right through you from start to finish.

Final Verdict: A love that leaves you aching and wanting; Eleanor & Park is a novel not to be missed!

“I read it again twice last night. You can take it tonight.”
“Yeah? Thanks.”
He was still holding the end of her scarf, rubbing the silk idly between his thumb and fingers. She watched his hand.
If he were to look up at her now, he’d know exactly how stupid she was. She could feel her face go soft and gummy. If Park were to look up at her now, he’d know everything.
He didn’t look up. He wound the scarf around his fingers until her hand was hanging in the space between them.
Then he slid the silk and his fingers into her open palm.
And Eleanor disintegrated.

“I don’t like you, Park,” she said, sounding for a second like she actually meant it. “I…”—her voice nearly disappeared—“think I live for you.”
He closed his eyes and pressed his head back into his pillow.
“I don’t think I even breathe when we’re not together,” she whispered. “Which means, when I see you on Monday morning, it’s been like sixty hours since I’ve taken a breath. That’s probably why I’m so crabby, and why I snap at you. All I do when we’re apart is think about you, and all I do when we’re together is panic. Because every second feels so important. And because I’m so out of control, I can’t help myself. I’m not even mine anymore, I’m yours, and what if you decide that you don’t want me? How could you want me like I want you?”