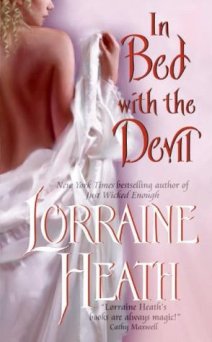 In Bed with the Devil by Lorraine Heath is the debut novel in her Scoundrels of St. James series. Lorraine Heath is an author who writes evocative tales of romance, that basically punches you in the gut with the depth of emotions they invoke from the reader. In Bed with the Devil seems to be a favorite amongst readers, which is why I picked this number up to read, after having read When a Duke Loves a Woman and the book having failed to deliver on all those things I expected from a Lorraine Heath.

The hero Lucian Langdon, the Earl of Claybourne (also known as the Devil Earl) is a man who believes himself to be a fraud owing to his childhood, having escaped a life of being part of a gang of ruffians in the London streets. Having no recollection of the events that preceded his life to a certain point, Luke might have grown up by all appearances to become an aristocrat, but beneath the surface, he has remained a scoundrel at heart.

Lady Catherine Mabry seeks Luke’s services for an act that would be considered nefarious by society’s standards. But Catherine is a courageous woman who has single-handedly being taking care of her bedridden father in the absence of her brother who had left and never returned. For Catherine to watch her friend live a life of abuse is something she cannot take anymore, the reason behind her seeking the services of a man who had tempted her senses since she had been an impressionable seventeen year five years past. She cannot explain what it is that had beseeched her to invite him to events since then, invitations that Luke had never acknowledged, and five years later, Catherine finds herself at the doorstep of the man himself, propriety of society be damned.

To find Catherine in his home is the last thing Luke would have expected, especially having returned home after another night of delaying the inevitable; asking Frannie Darling for her hand in marriage, something Luke believes to be his destiny given how their pasts entwine so deeply. Catherine seems to invoke in Luke a torrent of feelings that Frannie does not, but Luke is determined to stay true to his course, even if his heart might say otherwise.

Through the events that takes place in the story, a bond forges between the two, something Luke tries to allude to the fact that they spend so much time together. Catherine’s strength of character is immense throughout the story, the one defining factor in the novel that made me fall so completely in love.

I so adore a heroine who is not constantly trying to prove herself in the story, someone who is comfortable in her place, and shows bravery and courage where it matters. Catherine was that sort of heroine for me. She has no qualms about who she is, what she wants, she has no artifice when it comes to the opposite sex.

Even though Catherine knows that her reaction towards Luke has always been out of the norm, that does not stop her from seeking him when there is a need for it, and even when Catherine knows that her heart is in danger, that doesn’t stop her from giving all the love she has in her heart to Luke, all the while knowing that Luke has a different destiny in mind for himself.

Luke himself was admirable in so many aspects as well. Simply put, I loved him. There was a vulnerability beneath that cool demeanor of his, a soul that needed to belong under that facade of indifference. When the truth comes to light in the final couple of chapters in the book, this is where once again Catherine’s remarkable character shines through.

I so did love the ending, seeing Heath’s evocative and gut wrenching writing emerge.

Final Verdict: Realistic, evocative, and beautiful in prose; In Bed With the Devil was just wonderful.

“Catherine?”
A warm hand cradled her cheek, turned her head. She gazed into eyes so silver, so filled with concern. “Think about something else,” Claybourne ordered.
She shook her head, trying. To her mortification, she flinched and released a tiny squeak when she felt something sharp being jabbed into her flesh.
Claybourne leaned near and then his mouth was blanketing hers, skillfully plying her lips apart. Oh, the fool, did he not fear that she might bite down—
He tasted of the whiskey that he’d ordered her to drink, and she wondered if he’d needed some to fortify himself for what she was about to endure.

He’d covered her mouth with a blistering kiss before he’d thought it through. He could tell himself that he was bored with the dinner, bored with the conversation, but the reality was that it was driving him mad to watch her sip wine, to gaze at her slender throat and shoulders, to see her smiling at Bill when Luke wanted her to smile at him.
As he swept his tongue through her mouth, he knew it was wrong, but he wanted her, wanted her in a way he’d never desired Frannie. He wanted Catherine rough, he wanted her tenderly. He never thought of taking Frannie to his bed. He thought of marrying her, he thought of having her as his wife, but carnal images of them together never filled his mind. With Catherine, he saw a kaleidoscope of their contorted naked bodies.

A fine sheen of sweat coated his throat. Sweat belonged to laborers, not gentlemen, but she kissed his throat anyway, felt his pulse jump beneath her lips. Felt her own pulse leap when he buried his fingers in her hair and blanketed her mouth with his own.
She didn’t know what she’d expected. Something quick, painful, but still somehow exquisite. But this was more than she’d ever imagined. Beautiful in its intensity, frightening because she didn’t know how she’d live without it when it went away.

“Does it hurt?” she asked.
“God, no.”
She slid down, enveloping him in her silky wetness. He almost spilled his seed then and there. Instead he clenched his jaw, fought for control. He ran his hands up her slender back, slid them back around to her breasts, and began to knead her soft flesh.
Dropping her head back, she moaned. Then she began to ride him as though her life depended on it.

But his body wouldn’t be held back. He bucked beneath her, his deep feral groan nearly drowning out her cry of satisfaction, her back arched, her face carved in an expression of awe and wonder. Shudders wracked his body as the pleasure coursed through her.
She went limp, falling to his chest, spent. He wasn’t sure where he found the strength to wrap his arms around her, but he wanted to hold her close too much not to find the energy. He thought he could lie there forever. If he died this moment, he’d die content.

“Why do you have to be so damned courageous?” he asked as he kissed her neck, her ear, her throat, her chin.   She wondered if he’d want her if she weren’t, but she wasn’t brave enough to ask, so perhaps she wasn’t as courageous after all.
“Don’t talk,” she murmured as she kissed his temples.
He took her slowly, as though he realized this would be the last time, savoring each thrust, creating memories with each touch. There was nothing frenzied about their joining. Rather it was simply an appreciation that they’d escaped the fire, a celebration of survival, and perhaps in a way, a farewell.

His mouth was hot, desperate, eager. She was more than ready for him when he drove himself into her, like a man possessed, a man running from his past, a man unable to see his future. He pumped fast and furious. She met his eagerness with her own, digging her fingers into his firm buttocks, riding him as he rode her.
His powerful thrusts had the headboard knocking the wall, the pleasure rippling through her in undulating waves. There was madness here, and she didn’t care. She cared only about him losing himself in her, and her losing herself in him.