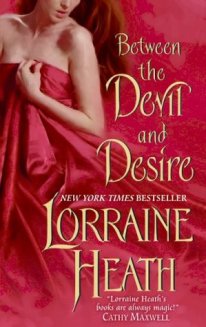 Having finished In Bed with the Devil, the first book in the Scoundrels of St. James series by Lorraine Heath, I was intrigued enough to begin the second title, Between the Devil and Desire. This is the story of none other than Jack Dodger, the infamous best friend of Lucian (Luke), who entices readers on so many levels even as a secondary character.

Jack is a man who has long accepted the fact that he would do anything to get his next coin, to ensure that he would always remain in a place where no one else could have power over him. Jack had been five years old when he had been sold by his mother, something that his young and older self “understands”, because Jack believes that hunger could drive any human to do even the most despicable of things.

Falling in with a notorious den of thieves, Jack had quickly mastered the art of thievery, learnt that practically anything could be stolen, if proper preparations are done in advance. Even though Jack believes himself to be someone who couldn’t care less about another person, meeting Luke, the role Jack plays in Luke’s fate, and how their lives become entwined, places Jack in the role of playing the responsible “adult”.

At the age of nineteen, Jack had come into a lump sum of money through an anonymous benefactor. Jack hadn’t looked twice and asked no questions. He had turned that into his fortune by building and opening his exclusive gentleman’s club. Rich, independent, and revered and disliked in equal doses by polite society, Jack couldn’t care less about ant of it, that is until he is summoned to the reading of the Duke of Lovington’s will by the late Duke’s solicitor.

Olivia Stanford, the Duchess of Lovington, is someone who has always been about duty. Which is why she had married someone 25 years older than her, because her father had arranged the marriage, and that is what respectable women do. Even though Olivia hides a deeply passionate nature inside, she is the modicum of propriety itself, leaving many to believe that Olivia is as cold and haughty as aristocrats come.

When Olivia’s late husband appoints none other than Jack as the guardian and protector of his heir until the child reaches of age or Olivia marries another, that is when true horror dawns on Olivia, leading her to take drastic steps to “save” her son from the clutches of a man who could turn the most respectable of society into the most depraved.

Jack is lured by the promise of a final item that the late Duke dangles in front of him, its value immeasurable according to the solicitor, who remains tight-lipped about what it could be. Even though from the onset, Jack knows that Olivia seethes with anger at the mere thought of sharing anything with him, and even though Jack knows he can charm Olivia if he sets his mind to it, he cannot help himself but irritate Olivia given the chance, all because he likes igniting the slow burning fires deep inside of Olivia which she hides from the rest of the world.

While the Duke’s reasons for leaving Jack as the guardian of his son remains a mystery, and Jack certainly does not like things he cannot add up together, all of that is revealed through the various events that lead up to the culmination of this story. Even though Olivia would rather die than depend on the likes of Jack, as these two are “forced” to spend time together, both of them find in each other aspects of their characters that they are drawn towards. The explosive secrets that come to light towards the end was one of the best parts of the story.

I liked the story. I truly did. Jack was after all, nothing short of fabulous, everything I desired him to be, vulnerable from past atrocities inflicted upon him at a most tender age. His uncaring attitude as most would see it, an image he cultivates with calculated effort, makes him the person every woman would like to blame her husband’s less than savory need to visit his establishment upon.

I had bit of a harder time liking Olivia. Not that she was any less as a character in the story as it unfolded. But because there was a time or two towards the latter part of the story where she was still in doubt over Jack and his intentions. Olivia was also a trifle bit tiresome at the beginning, with her deep distrust of Jack (which was also understandable to a certain level), her inability to really commit to her feelings towards Jack – which at a certain point she finally did make up her mind and did get going.

I also felt that given all the build up of sexual tension between Jack and Olivia, the culmination of it all was just a bit anti-climactic. The way I see it, there is a deep wealth of passion hidden inside of Jack’s projected attitude. Fires banked over what he considers would make him more vulnerable by exposing own needs and weaknesses. I wanted that passion to tumble free, for it to take a hold of both himself and Olivia, who herself dreams of being possessed and dominated by someone as virile and undoubtedly decadent as Jack. Aside from the scene in the garden, which was pretty explosive, the rest of the scenes of passion seemed pretty mundane in comparison.

However, I enjoyed the overall story, the villain and his role in Jack’s life, meeting Feagan who had shaped the live of the main protagonists in the series, and the way Olivia finally accepted the true worth of the man who loves her without hesitation or condition.

Final Verdict: Jack’s smoldering passion meets the reserved and unstoked fires hidden beneath all the propriety that is Olivia. Enjoyed this succulent delight in many ways.

“I’ve warned you not to forbid me,” he growled.
Before her next heartbeat, he’d slid his hand around her neck, holding her still, as he slashed his mouth across hers. He was not gentle or polite. He was almost savage with his desire to deliver what she’d requested. She relaxed into him, offered up no objections when his tongue urged her lips to part and slid smoothly into her mouth. Heat spiraled through her, melting her bones as though they were little more than tallow. He touched her with nothing except that one hand and his mouth, yet it seemed as though he caressed her everywhere, inside and out, shallow and deep. How could a kiss be this powerful, elicit such yearnings?

Suddenly changing the angle of his mouth, he deepened the kiss, his tongue leisurely exploring, enticing her to do the same. As he drew her nearer, held her close, she was not hampered by layers of petticoats or skirts. Quite frankly, there was little more than a few pieces of fabric separating her skin from his. His body responded with a fierceness that she needed no imagination to envision. She knew exactly what he looked like, images of him in the dressing room bombarding her, igniting a fire low in her belly.
She heard a harsh plea and feared it came from her.
Breathing heavily, he tore his mouth from hers. Only then did she realize she’d fairly wound herself around him. She immediately dropped her arms, stepped back.
“You do bewitch me,” he rasped. “Fair warning, Duchess, I fear this is the last time I can settle for only a kiss.”

They walked to the library without touching. As soon as the footman closed the door in their wake, Jack had her in his arms, holding her close, as his mouth swooped down to claim hers. She wanted to laugh from the joy of his eagerness. She’d never felt desired, and with him, it was as though he was hungry, hungry for her alone.
His mouth blazed a trail along her throat. “I was going mad sitting at that table making pleasant—and utterly boring—conversation, when all I could think about was how much I wanted to taste you instead of the chicken.”

She felt his mouth brushing over her shoulders and only then did she remember that he had a pickpocket’s fingers and light touch. He’d worked her buttons free from throat to stomach and she’d not even noticed. And now the gown was sliding off her shoulders, gliding to the floor.
She had a second to consider that she should feel a need to cover herself and then she was considering nothing at all except for the wondrous sensations of his mouth playing over her breasts: tasting, licking, suckling. All the while, he murmured that she was “beautiful. So beautiful.”

She gasped as the pleasure spiked.
He lifted his head, studying her. He glided his finger over her, eliciting another cry, her legs squeezing together as though to hold him there or perhaps to urge him on.
“I want to watch you, Livy,” he whispered roughly. “I want to see what the darkness of the garden kept from me. Let go, Livy. Let go.”

Then she felt him pushing into her, inch by delicious inch, the fullness of him stretching her further, increasing the pleasure tightening low in her belly. When she thought she could take no more, he lifted her hips slightly, shifted his weight, and buried himself completely into her, bowing her back with the exquisite sensation of feeling his weight pressing against her.
“Oh, God,” she whispered.
Threading his fingers through hers, he moved her hands so they rested on either side of her head while he rode her unmercifully, mercifully. Her body sang to his tune, pleasures rippling through her, increasing in intensity as his powerful thrusts moved not only her, but the bed.

He rode her hard, the motion of the train whispering at the back of his mind, giving him a cadence that he matched. For some reason, he thought of the people in the open railway car. He covered Livy’s mouth, absorbing her scream as her body tightened, pulsed, and throbbed around him. It was all he needed. His body bucked, the pleasure intense, almost painful. It was always more with her, more than he’d ever had, ever known.
Everything with her was different. Everything was better.

“I want to hear you,” he rasped.
And hear her, she was certain he did. Writhing beneath him, she heard her cries echo low and breathless, hardly aware they were coming from her. She held him close, dancing at the edge of intense pleasure. He knew when to stroke, when to suckle, when to pause, when to thrust with his tongue. He tempted and teased. He of the nimble fingers had a more nimble mouth. It stole her strength, her resistance.
Then she was screaming out his name and before the last of the shudders had wracked her body he was buried deep within her, his gaze holding hers as he rocked his hips against hers, his powerful thrusts causing the sensations to begin building again. She skimmed her hands down his back, cupped them around his buttocks, urging him on.