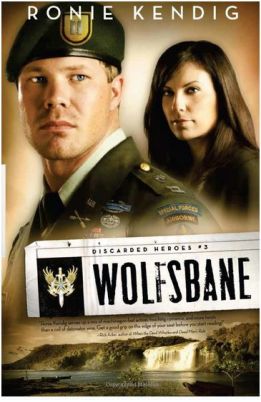 Wolfsbane is the 3rd book in the series entitled Discarded Heroes by Ronie Kendig. This series focuses on men who have served their country in the military, men who have been discarded by their government who are then infused with hope by a high ranking official who gives them a chance to become a member of an elite black ops team known as Nightshade.

Captain Canyon Metcalfe is such a hero whose career as a Green Beret medic had been ripped out of his hands 24 months prior to the start of the novel. Discharged from service with little to his name apart from shame and guilt  that hounds him day and night, Canyon is a loose cannon until once again he is given a purpose in life as a member of the Nightshade team.

26 year old demolitions expert, Lieutenant Danielle Roark is a woman who has visited hell on earth and survived. Having spent almost six months in Venezuela as a captive raped and tortured at the hands of the VFA i.e. The Courage of Bolivarian Army headed by the notoriously evil General Humberto Bruzon. Danielle escapes with her life barely intact only to be labelled as a traitor by her own country requiring that she return to Hell on earth once again to prove that she had not been fabricating the story of how she was captured and was held against her will.

Though it is Canyon’s younger brother that lays claim on Danielle at first, it is the undeniable connection that springs forth between Canyon and Danielle that makes her feel safe for the first time since her ordeal at the hands of General Bruzon and his men. Though Canyon tries to do the honorable thing and step aside to leave the field clear for his younger brother, emotions that Canyon had thought long since buried after losing the woman he loved renders Canyon unable to turn away from how Danielle makes him feel. And as luck would have it, it is Nightshade that is tasked with the responsibility of getting Danielle safely in and out of Venezuela to find the proof that she needs in order to clear her name.

Ronie Kendig does a swell job of describing the many a risky situations in which the hero and heroine finds themselves in, together with the team of Nightshade. The descriptions were vivid enough to make me feel as if I were watching a movie rather than reading a book, which was one of the best parts about this story. I loved how Canyon and Danielle’s relationship unfolded, both broken people who heal along the way to deserve each other and the love that springs forth between them as time works its magic on their bruised emotions and feelings. A realistic pace is what the author sets with Danielle, a woman who endures the worst type of horrors that anyone of the fairer sex can undergo, and emerges as a broken woman in body and soul, nearly driven to take her own life until she learns to gather strength from the man who stands unwaveringly by her side through the worst of times in her life.

When I picked up this novel from Netgalley, I really had no idea  that this was also categorized under Christian Romances though I later saw the label which at first I missed. I usually refrain from reading books that preach any sort of religion and was keeping it in mind to stop reading if the book were to get too preachy for me. However it turned out that reading a Christian Romance wasn’t so bad after all – in the end its just about instilling hope in those who seem to have lost their way.

Though Ms. Kendig brings to life the sizzling attraction that flares up between Canyon and Danielle right from the very start of their relationship, there are no scenes of any explicit variety included in the story. So this would be an ideal romance for those who like the build up to the act and leaves the actual act of sex to the imagination of the reader. I recommend this title for fans of the Discarded Heroes series, Ms. Kendig definitely knows what she is doing with these hot-as-sin ex-military heroes and I’m sure her fans would agree with me on this 100%. I would also recommend this title for those who love military themed action-packed romances because this is one story that delivers on all counts.

His deep laugh rumbled through the night – and straight into Dani’s soul. As he scooted in and looked around, his gaze stumbled into hers. He stilled, his smile slipping.
Dani’s pulse hiccuped. She wanted to look away. Even told herself to. But if she did, she might never find a moment like this again.

His lips swept over hers.
Thrilled- yes, he felt the same way! – and eyes closing, Dani leaned into his kiss that caressed her mouth, warm, hovering, then pressing. Why did everything with this man feel right and beyond wonderful? Something about him, about his gaze, his touch, spoke to her. To all the wounded places in her heart.