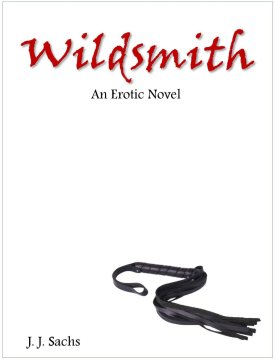 Wildsmith by J.J. Sachs is a novel that took me completely by surprise, in a wonderful way. Lucy Albright is having a hard time with her boyfriend Kieran James, the best looking guy in the university, who should have been able to knock her socks off and then some. But time and yet again, Lucy finds herself frustrated, left hanging too many times to count and on the verge of screaming herself hoarse from the sheer frustration of it all.

When Lucy’s new professor Doctor Jason Wildsmith revvs her engines in more ways than one, Lucy is at first wary though excitement tinges along with it. The intensity that is Wildsmith is one that Lucy is hardpressed to ignore and finally, Lucy decides to give in and test the waters where Wildsmith is concerned.

The ending when it came was one that made me want to howl. I so wanted the story to be done in one book, but the fact that this is the debut book in a series meant that I had to go through the agonizing end and weep over what both Lucy and Wildsmith has to go through to hopefully come out stronger and united when the series is through.

The one thing I did love about the ending though was the fact that Lucy gained enough self confidence to take charge of her sexuality. And though I did love Lucy’s dominant side towards the end, I do wonder how that is going to work with Wildsmith. Somehow I have a hard time conjuring up two dominants together. Even then I couldn’t help but mourn for Wildsmithm, the man who has entered my heart and I don’t think that there is going to be any other for either Lucy or me!

Definitely recommended! I am definitely going stir crazy with curiosity over how J.J. Sachs is going to turn around the story now!

She had gone less than ten yards when he heard the sound of running feet. A hand fell on her shoulder, whirling her round. Arms wrapped around her, and Wildsmith’s mouth fell on hers. With a hunger she hadn’t known she possessed, she answered his kiss.

And still he went on. All restraint gone, he allowed her legs to fall open and grabbed her hips. Hair falling across his eyes, growling with his own pleasure, he pounded his cock into her, pulling on her hips to make sure she took every last millimetre.
She cried out again as a fresh wave of orgasm shattered her, almost weeping as he fucked her with rough, animal wildness.

“Open your eyes, Lucy. I want you to watch this in the mirror.”
She obeyed, instantly.
“You will learn to control yourself,” Wildsmith continued. “Now I am going to fuck you. If you make a single sound, or move, until I give you permission, I will stop and this session will be over.”
How can he be so fucking cruel?
The thought was blown away in a hurricane as Wildsmith gripped her hips and pushed into her.

Fearing to move in case he stopped completely, she could only bite her lip in frustration as he entered her millimetre by frustrating millimetre. Breathing ragged, she fixed her eyes on the image in the mirror to distract herself. The reflection she saw there just made her need worse: Wildsmith rising above her naked body, hair hanging over his face; candlelight gleaming on his skin; jeans hanging open. Her own eyes were fierce and wild; the collar still around her neck making her look like an animal.

Her orgasm was instantaneous; the howl that wrenched from her throat as she arched her back and lifted her head, primal. Her body shuddered and shuddered again, as Wildsmith’s driving shaft finally brought release. Lucy could no longer tell pain and pleasure apart. Every part of her was caught up in a blossoming explosion that ripped through her, touching off fresh, bigger and deeper explosions. It was as if Wildsmith had spent the previous hour setting explosive charges throughout her body and was now triggering a series of ever-greater detonations with the relentless thrusting of his cock.