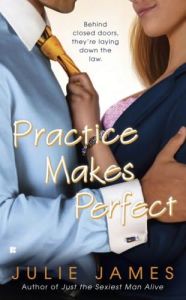 Finishing this book means that I have read through the list of available books by Ms. James and I would have to say that she is one helluva of a writer, one that I would definitely be on the look out for in the future. It’s too bad that she has published just only 3 novels. Now if there were like 15 more so titles to go through, I would indeed be a very happy bookworm for a couple of weeks.

Anyhow, I have identified that Ms. James likes to write romances that feature lawyers, that factor into the story their busy lives, how they juggle their careers, how stressful their lives actually are trying to become a partner of their firm and of course scenes of the courtroom drama makes it all a more worthwhile read. This book is in no way an exception to this rule.

Payton and Jameson have been working for the same law firm for the past 8 years, during which they have both worked their asses off foregoing everything just so that they would be able to make partner after the 8 year term is up. Never having a cordial relationship between them has boded well for them since they have never had to work together on anything as their branch of law took them in different directions most of the time.

However, fate works towards bringing these two together when a 20 million dollar legal case jumps into their firm’s lap and Payton and Jameson are both assigned to woo this client into hiring their firm for the job. Once this becomes a done deal, however Payton and Jameson both realize that somewhere along the way, the rules of making partner in their firm has been changed and that only one of them would come out as the winner.

All the bets are off when slight misconceptions of actions by both Payton and Jameson to one another brings out moments filled with hilarity that I couldn’t stop myself from laughing out loud several moments during the novel. Especially the part where Payton has her naked butt in the air in front of everyone at the court house and the hilarity that ensued is something any romantic comedy lover would definitely love to read.

As much antagonistic and distrustful these two are of one another, they both slowly come to realize that the facade of anger and animosity that they have put up around one another is just a defense mechanism against letting themselves recognize what they actually feel for one another.

Its a journey fraught with misunderstandings, hilarity, passion and sweet moments that definitely makes this book a worthwhile read.