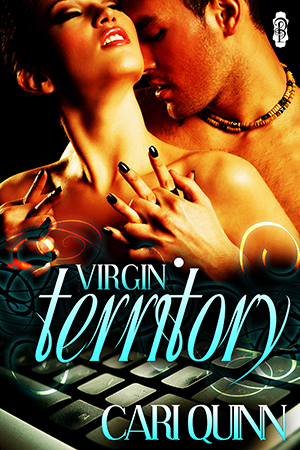 Ladies! The days of stereotyping geeks are over. Meet Vincent, the geek of MY dreams and please take note of the ‘my’ in the sentence while you are at it *winks*. Cari Quinn has a talent for creating geeky heroes that appeal to all your senses and Vincent was no exception to this rule.

Kiki is determined that her crush on Vincent remain just that, a crush. She has no intention of getting entangled with a man who is notorious for leaving bleeding hearts in his wake and Kiki knows that although her girly bits would love nothing more than to jump his bones, her heart and other emotions are more wary of laying her heart on the line ever again.

But somehow, through a quirky set of events, both Kiki and Vincent find themselves in each other’s company, saying yes to that undeniable desire that courses through them whenever they lay eyes on each other. For Vincent, Kiki is someone who tests and pushes his comfort zone and tests his boundaries when it comes to his emotional involvement. Kiki has no doubt in her mind that when it comes to Vincent, everything between them is temporary and she is determined to not put her heart on the line.

But sometimes, the best of intentions are waylaid, and through all the chaos that reins, two people do find that special something called love that is worth holding on to, and that is exactly what Cari gives her readers with the story of Vincent and Kiki.

Vincent is such a fabulous hero. I swear. He is broody, a bit tortured and possessive enough to make this girl melt in all the right ways. I loved how possessive Vincent’s thoughts turn when it comes to Kiki, a foreign concept for a man like himself. And his ‘surliness’ as a result lends him that edge that I find extra appealing when it comes to heroes that I love. And yes, Vincent wins any contest in that department hands down.

Kiki was a wonderful heroine, everything that Vincent needs in his life and more. She is beautiful inside and out and her giving nature is what drew me to her and kept me a fan until I turned the very last page. She has her own issues when it comes to relationships and giving her trust, understandable after what she has gone through. But her willingness to put it to test with Vincent who makes all her senses hum just by being in the same room made her win my affection. I love a heroine who doesn’t dilly dally and Kiki is someone who is gutsy enough to go after what she wants and I loved her wholeheartedly for that.

A little toned down in the sexual aspect than what Cari usually delivers, nevertheless Virgin Territory makes for an awesome read, a book that is worth your time and money if a good, emotional contemporary romance is what you are itching to get your hands on.

He threaded his hand through her hair, tugging her closer. Her body strained toward him, her breasts all but bursting the buttons of her flannel pajamas. She swallowed the last of the candy cane as he lowered his mouth to hers.
He didn’t ravage, as she’d expected. His mouth was soft and warm on hers, and the scrape of his stubbled jaw added to the thrill. She moaned and clung to him, her mind emptying like sand tumbling from a bucket.
Resist? Absolutely not. She wanted this. Him.

He tugged her over the threshold with his good arm, barely cognizant of her startled squeak before his mouth swooped down to cover hers. She tasted pepperminty, as if she’d been sucking on a candy cane again. He swept his tongue between her lips to taste more of her while her arms locked around his neck.

There were so many ways he could have answered her snarky question. But sometimes, direct worked best. Leaning forward, he hooked a finger in the waistband of her pants and tugged. She stepped forward without hesitation and met his mouth hungrily.
Well, hello.
[…]
She wound her hands into his hair, arching against him so that her thighs pressed against his. With the added height from her heels, everything lined up perfectly. Center to center, mouth to mouth, heart to heart.

Soft. She was so soft, and warm. So giving as she moved with him. Rising to take him in, the covers shrouding her back as she arched.
His lips clasped her nipple and she cried out, her fingernails dragging down his hips. She clamped around him. Squeezing. Taking. Giving more.

She surrounded him. Wet, hot. Indescribable. Spasms rocked her, and she lost herself in their rhythm, riding him so fast she was nothing but a blur. But as much as he wished it would never end, no times tables and no images of grungy linoleum floors could keep the flood of her orgasm from inciting his own.