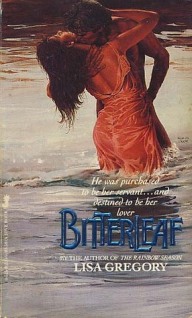 Bitterleaf by Lisa Gregory aka Candace Camp was first published when I was just barely one year old. Since this book has never been released in the eBook format, I purchased a used paperback copy of the novel sometime back. This book was listed in one of the recommendation threads I had been searching through way back, in my attempt to find novels where plenty of angst is to be had in a story that brings together two strong willed characters in a marriage of convenience.

When Bitterleaf begins, 21 year old Meredith Whitney, considered plain and gawky because she is taller than average and is not considered a beauty that would turn a man’s head, goes to Charleston with her stepfather Daniel Hurley. Meredith’s mother had died sometime back, leaving her with her stepfather, whom she had grown to love and respect in time. Under Daniel’s hands, Bitterleaf, the homestead where Meredith had grown up, had flourished and prospered, making Meredith a wealthy woman in her own right.

It is when Meredith, in her bid to escape the companionship of her vapid cousin Phoebe steps out into the market with her stepfather that she faces the man who would change her life in ways she would never have thought possible. Jeremy Devlin, a member of the aristocracy, whose uncle finally has enough of him and sends him on his way to the colonies as an indentured servant, finds himself purchased by none other than the man accompanied by the haughty woman whom he promises to teach a thing or two, if he ever has the chance.

Even though Jeremy finds Meredith to be plain and lacking in terms of beauty, there is something about her that draws him to the “Amazon” that she is in his mind. Jeremy prefers women who are more comely, but it is Meredith and the way she looks at him, with innocent wonder in her eyes that makes him burn.

For Meredith, laying eyes on the tall and sapphire-eyed Jeremy is the end to life as she has known it. Meredith, who had considered herself above those ruled by their want for pleasures of the flesh, finds herself wanting something that she herself does not even understand. It is perhaps owing to this and Jeremy’s frustration with Meredith that culminates in the resulting events, causing a rift that practically defines the whole story from that point onward, casting a dark shadow on every interaction that takes place between Meredith and Jeremy, especially when they are “forced” into a marriage of convenience.

I wanted to like the story, I really did. After all, this had all the ingredients that should rightfully satisfy my appetite for the less than conventional/accepted romances by readers today. To a certain point in the story, everything did work for me. But from the point where Meredith couldn’t seem to come clean about what was bothering her, how she started to continually grate on my nerves (now imagine poor Jeremy who actually had to put up with her?) was the point of no return for me when it came to my dislike for Meredith as a character.

Meredith turned out to be a tiresome, hateful in some ways, unable to look beyond her own insecurities that are of course ingrained deeply in her psych. However, for me, just like a man’s inexcusable behavior towards the heroine is not forgiven all because of what he may have faced during his childhood, I hold the heroine too to the same standard. I found Meredith wearisome especially when it came to not being able to see Jeremy’s desire for her for what it truly was – desire for the woman he wants above anything and anyone else.

Meredith never gives Jeremy the chance to explain things, which once again puts a black mark against her already laborious character. I dislike couples who detract from the enjoyment of the angst that should rightfully be present in a book such as Bitterleaf, but Meredith’s way of being unable to open her mouth without something scathing coming out of it, her self righteousness above everything else was certainly the straw that broke the camel’s back when it came to Meredith and the story itself.

I felt that the story would have been better had Jeremy left and Meredith finally had to face the erroneous assumptions she had made about a man who would would have given her everything. She should have learnt the hard way that Bitterleaf alone wouldn’t give her lifelong happiness. The way one of the secondary characters left the story was also a bit of a sore point. While I understood Meredith’s jealousy, I found her inability to forgive and move on a sore point, especially when nothing had actually happened. For me whatever good that was Meredith was overshadowed in a large way by her critical nature. Her inability to look beyond and see the larger picture.
​
In the end, I skipped through huge chunks of the story just so I could reach the ending because I had invested a lot of time in reading Bitterleaf, not to to mention the first half of the story that was enjoyable.
​
Final Verdict: Bitterleaf’s name is synonymous with a character trait that defines the heroine. I expected more from the story than a woman who could not look past her own insecurities.

“Jeremy, what are you doing? Stop this at once.”
He chuckled. “Your voice lacks conviction.”
“You startled me, that’s all.”
An eyebrow quirked in disbelief. He dropped her glove on the ground and placed his hands on either side of her face, imprisoning her head and forcing her to look at him. For a long moment, he stared into her green-brown eyes, and then his face lowered. Meredith closed her eyes and sought to pull away, but his grip held her firm. Jeremy’s lips took hers gently, moving upon them in exploration as if he had all the time in the world before him.

At first his kiss was harsh and angry, more a demand than an expression of feeling, but at the touch of her soft lips it didi not remain so for long. His lops gentled as he tasted the sweetness of her mouth. He worked at her with tongue and lips and teeth, exploring, hungry, until she responded with a whimper and her arms came up to curve around his neck. Her tongue met and matched his, easing tentatively into his mouth.
Jeremy shudderedm hurled violently into a relam beyond reason, aware of nothing but the supreme pleasyre he held in his arms. He rained wild kisses across her face and neck, mouthing the soft flesh of her throat, nibbling her sensitive earlobes. Meredith moved in his arms, unable to absorb the multitude of delights he showered upon her.
​
Suddenly his lips dug into her fierecely. He wrapped his arms around Meredith, pulling her down with him until they both knelt on the floor. Jeremy pressed her torso against his firm body, savoring the thrust of her breasts against his chest. “Meredith,” he breathed. Holding her, he lay back on the floor, pulling her on top of him. It seemed to Meredith a surprisingly natural place to be.
With one hand he shoved down the bodice of her dress, and his mouth trailed down her neck and chest to explore her breasts. He made asoft, wordless noise as he took her nipple into his mouth and felt it harden at the touch. The sound stirred Meredith almost as much as his caressing tongue. She felt strangely weak and melting, itching, yearning.
​
Jeremy drew back, panting. “God, you tempt me. But I won’t take you like this, on the floor of the study. Not the first time. We shall splendidly be married and marvelously naked in our own bed. I wanted to give you a taste of what you’re ‘buying.’ Perhaps there will be women who snicker, but you can bet there isn’t one who wouldn’t trade places with you, because you’ll wake up smiling. They’ll pretend to pity you, but in reality it’s envy they’ll feel, thinking about the nights you spend tumbling in my bed, well-serviced, while their own husbands are out wenching at the tavern or sporting with a slave girl or too tired or lazy or old to give their wives pleasure. They yearn, my love, they hunger for a young, healthy male like a mare in heat. Believe me, they’d grab at what you have. They’d pay any price to have the sleepy, well-loved look your face will wear. Maybe you bought me on the auction block, but I’ll give you more than you could ever pay.”
​
“Jeremy,” she sighed when his mouth released hers.
He nibbled at her earlobe, sending bright shivers all through her. “Say it again.”
“Jeremy?”
“Yes.” His breath came hard, in short gasps, his skin as burning and damp as that of a man in the throes of a swamp fever. “My name. You’ve never said it. Jeremy.”
“Jeremy,” she repeated in wonder that he should want her to say his name.
“Oh, Meredith, Meredith.” His mouth was running wild over her neck and shoulders.
​
“Oh, Jeremy, you won!” Meredith’s eyes sparkled.
The hand that had lifted her up fastened behind her neck and turned her to him, his mouth sinking into the softness of hers. The warmth that had mushroomed in her belly now shot through her enture body. Meredith didn’t give a thought to the other spectators. Instead, she wrapped an arm around Jeremy’s neck and pressed her lips against his. He was hot, his shirt damp beneath her hands. Her nostrils were filled with the pungent odor of horse and sweat. Boldly, instinctively, her tongue flicked out to scoop up the tiny droplets beading his upper lip. Her movement interruped their kiss, but Jeremy didn’t seem to mind. He made a startled, almost animal growl deep in his throat. His free hand slipped beneath her volumnious cloak, straining her against his body, and he kissed her with even more passion, his tongue raking her mouth.
​
His hands went to the sash of her wedding gown, untying the knot and letting the belt fall. Slowly, savoring the moment, he shoved back the heavy velvet robe, exposing her body clad only in the almost transparent nightgown. She heared him catch his breath and glanced up. His face was flushed, the eyelids heavy, shuttering the intense blue gaze. The dressing gown crumpled silently to the floow as he studied her. All mockery fled from his face as he looked at the swelling mounds of her breasts, nipples dark against the thin material. His eyes moved downward, taking in the smooyth line of her legs, hazily revealed beneath the cloth, all the more tantalizing for their faint concealment. Meredith watched him, braced for a jest or offensive mark, but none came. She sucked in her lower lip, Jeremy’s eyes darkened to a deep midnight blue. “Meredith.”
​
He began to move within her, but unlike their earlier lovemaking, he thrust again and again. Instead of satisfying her ache, it seemed to make it grow until Meredith involuntarily rolled her head from side to side. Jeremy pounded into her, and she arched up to take him in more fully. She wanted all of him. And something more. She didn’t know what, but the urge was deep and driving.
But Jeremy knew. At her whimper of frustration, he began to move faster, his hips churning, carrying her with him to a new universe of blinding pleasure. He hurled her higher and higher, until she was gasping for breath and clutching at his back, her nails digging unthinkingly into his skin.
​
Purchase Links: Amazon | AbeBooks 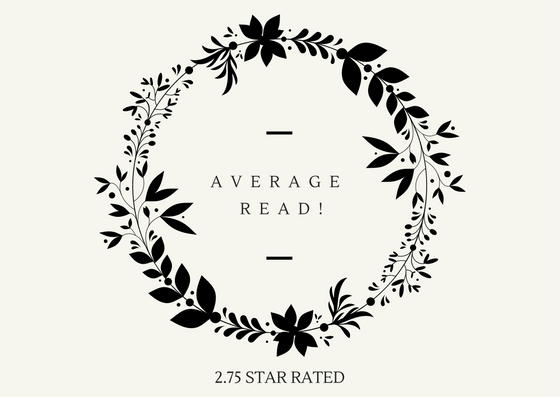