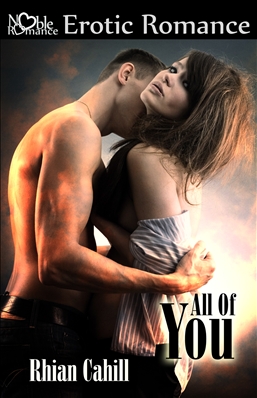 Rhian Cahill is one of my go-to authors for highly sensual erotica that pleases all the senses. If you are a fan of erotica and have never heard of Rhian Cahill, you seriously don’t know what you are missing!

All of You by Rhian Cahill is a story from a favorite trope of mine. Where older heroines find their happily ever after with younger heroes which makes for very interesting reads.

29 year old Ryan Doherty has had the hots for his next door neighbor, 41 year old Claire Jones ever since he laid eyes on her. The only thing that stops him from making a move is not knowing whether or not Claire feels the same way about him.

Though short, Rhian still manages to tell a story that left me wanting more and desperately in need of a cold shower or two with the dirty-talking Ryan talking up a storm, upping the heat factor of a novella that already far exceeds the scorch meter.

Ryan is of the ultra-studtastic variety, living up to what I imagined him to be and then some. Apart from the way he can seduce Claire of all her inhibitions, the way he cares about her enough to want to protect her and cosset her and look after of her every want and need; well, there’s nothing more that’s needed to be said. Ryan is the ultimate younger hero that every woman should have; protective, dangerously sexy, charming and palpitation-inducing-hot that just makes him perfect hero material.

Claire served to be someone who had the guts at first to put aside everything else and concentrate on just being with a man who makes her feel safe, warm, loved and decadently sexy all in one. But when reality strikes and pierces through the bubble of happiness that she finds herself wrapped up in, she goes in the self-sacrificial-lamb routine which irked me for a bit. But then again, Claire does make up for all of it quite beautifully in the end which totally redeemed her in my eyes.

Ryan’s nostrils flared, and his gaze came back to meet hers. The heat and lust swirling in the green orbs delivered another burst of heat to her body. Claire shivered.

The woman had him tied in knots. She hardly gave him the time of day, but all she had to do was breathe in his direction and his dick was raring to go, his body pounding with a need that consumed his every thought.

Sitting on the stool put her eye-level with his throat. The bob of his Adam’s apple as he swallowed tantalized her. What would he taste like if I licked him there? Her body swayed forward, and her tongue slipped out to run over her bottom lip.
Ryan groaned, and Claire’s world tilted.
His lips slammed onto hers. There were no gentle, getting to know you sweeps of his tongue. He thrust into her mouth, meeting no resistance as she gladly opened for him.

Claire squirmed under his close scrutiny—struggled to keep from covering herself with her hands.
“Don’t.” He reached out and touched her clenched fists with his fingers. “Don’t think you need to hide. You’re beautiful. Every inch of you.”
Bringing her gaze up to meet his, she saw the strength of conviction in his eyes.
Whether she thought herself worthy of him or not, he had already made his decision.
And that was all that mattered.

Like a drug, she entered his system and took over, delivering a jolt to every cell and obliterating all else. And like any addict, he took the fix, felt the euphoria and craved more.

Ryan took her mouth with his. Nibbled and licked until she opened for him. His tongue swept inside and tangled with hers. Bold strokes and hot slides stole her breath and drew moisture from her core. He touched her nowhere else, but she felt him in every inch of her body.